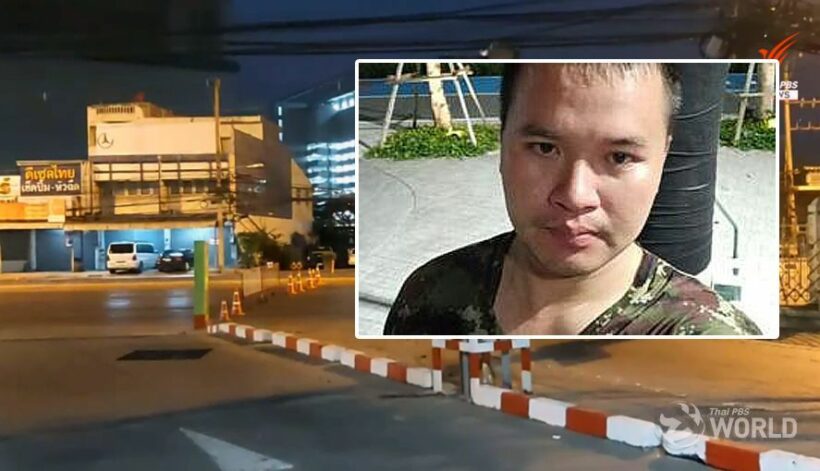 A confirmed 12 people have been shot dead, some social media are already reporting up to 20 may have been shot dead. Many more are injured after a Thai army soldier, identified as Sergeant Major Jakraphanth Thomma, went on a shooting rampage this afternoon in Korat, Nakhon Ratchasima. The mass shootings are said to have started around 5.30 this afternoon.

The gunman is alleged to have attacked and shot his commander, 48 year old Colonel Ananrote Krasae, and an elderly woman dead at a house, before stealing an HK assault rifle and ammunition, and fleeing from his army base in a Humvee, military-style 4-wheel drive.  to the Terminal 21 shopping mall in the centre of the Korat city.

Police report that he then opened fire at a Buddhist temple, and then is said to have killed at least ten as he fired indiscriminately on his way, and then storming into the Terminal 21 shopping mall in the main city centre.

Nakhon Ratchasima is north east of Bangkok in the region called Isaan.

Thai media have posted video showing the armed man, dressed in full assault uniform, getting out of the vehicle at the Terminal 21 shopping mall, firing shots as people tried to flee the scene. More footage shows a fire outside the the front of the building.

The gunman kept a livestream running on his Facebook page of the entire incident. Facebook has since taken down the page at approximately 7.20pm, Thai time.

Authorities sealed off the area around the shopping centre as they continue to track down the suspect. He remains, as of the latest reports, holed up inside the building and is reported to have taken hostages. Police are warning people to stay away from the area.

One of his earlier posts and selfies had the text added… “It is time to get excited.”

Thailand has one of the highest rates of gun ownership in the world but mass shootings have been rare. Several shootings at courthouses late last year, and a high-profile shooting by a crazed school headmaster last month in Lopburi, where seven people were shot – three dead – is also renewing concerns about gun violence in the Kingdom. There are weekly reports of gun violence in Thailand.

At this stage the Korat Army gunman remains at large.