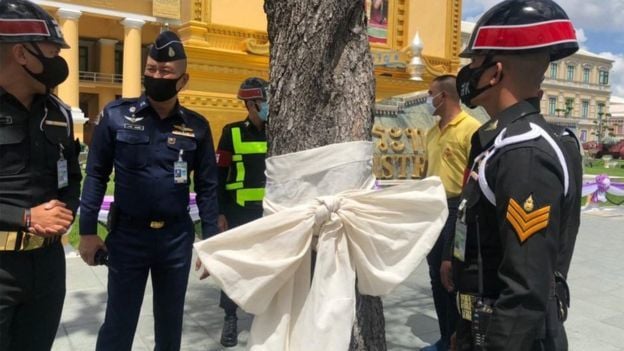 3 students were sent to the police station after tying big white bows to the gate of the Democracy Monument in Bangkok. The students called on the Thailand and Cambodia governments to address the abduction of an exiled Thai political activist.

The students were charged for violating the Road Traffic Act by tying the bows, according to Coconuts Bangkok. The Student Union of Thailand posted a live stream yesterday from the protest showing police removing the ribbon and taking students to the police department (below). The group also posted photos of white ribbons tied to objects throughout Bangkok.

Political activist 37 year old Wanchalearm Sataksit was living in exile in Phnom Penh, Cambodia’s capital. The Human Rights Watch claim Sataksit was dragged into a black car last week by a group of armed men and has been missing since. His sister was talking to him at the time on the phone. He ran an anti-government Facebook page. Thai police issued an arrest warrant in 2018 accusing him of violating the Computer-Related Crime Act for writing a post “inciting unrest”.

The Cambodian police announced yesterday that they will investigate Sataksit’s disappearance. The Royal Thai Police has refused to investigate the alleged abduction, one saying “This did not take place on Thai soil … Thai authorities do not have the authority to meddle.”

The former deputy director of the National Intelligence Agency says Thailand doesn’t have the resources to investigate, and urges people not to assume Sataksit has been abducted and killed.

“An abduction is a high-risk operation and needs a superpower nation to do it … Thailand is not a superpower.”