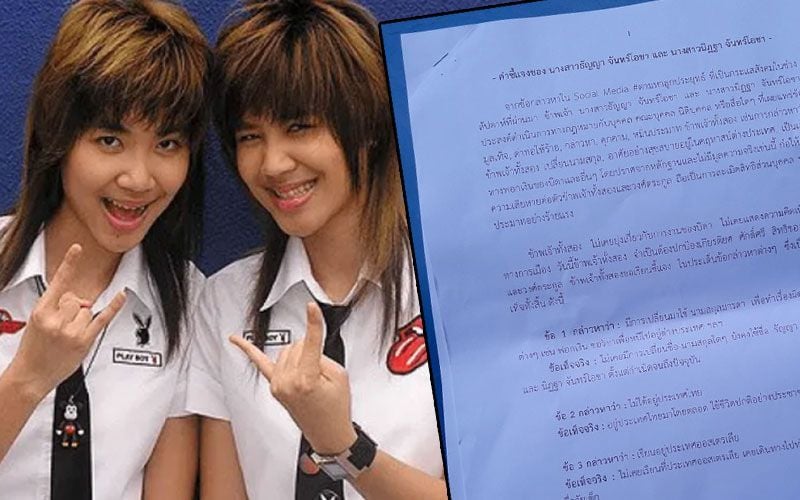 Rumours spreading over social media about the Thai PM’s twin daughters are so far from the truth that the twins have filed a lawsuit against more than 100 people for defamation.

Lawyer Apiwat Khanthong, representing twins Thanya and Nittha Chan-o-cha, says more than 100 social media accounts are facing libel charges under Thailand’s Computer Crime Act and the Criminal Code. Social media accounts for some politicians might be reviewed by police to see if they shared the defamatory posts, the lawyer says. PM Prayut Chan-o-cha is not involved in the lawsuit, but he did tell reporters that his daughters have a right to protect their reputations.

Most of the posts are on Twitter and many of the rumours are not true, Apiwat says. One post claimed that the twins changed their names to their mother’s surname because they wanted to escape an alleged money laundering case against their father. That’s a lie, he says.

Another claim was that the daughters failed their master’s degree exam. Their lawyer says the rumour is also untrue. The twins never even pursued a master’s degree, so there was never a test, he clarified.

Some posts say the twins lived in a mansion in the UK, that’s also false. Their lawyer says the last time the twins stayed in the UK was 5 years ago and they were only living there for a short period of time. He says they travelled on tourist visas and stayed in a hotel.

Other posts accused them of breaking the law in other countries and receiving money from their father.

The twins don’t have social media accounts. Apiwat says the girls want their personal life to remain private, but they also want to make sure no one throws their names around for personal gain.