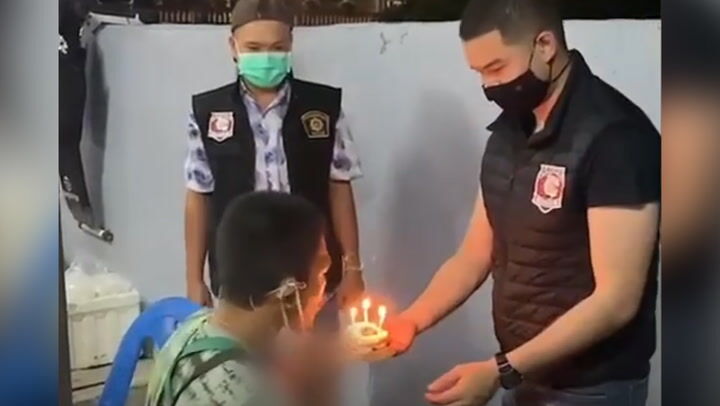 Officers in Nakhon Si Thammarat surprised a man who was detained on drug charges with a birthday cake. Police who arrested the man looked at his ID card and noticed it was his birthday. The 33 year old man claims says he had never blown candles on a birthday cake before.

The man was driving his motorcycle when he noticed the police. A report from the Thai media outlet Thairath says the man attempted to drive off in the opposite direction to avoid confrontation with police. Officers followed and the man pulled over. Police say they seized 10 methamphetamine pills. The man allegedly admitted to buying the drugs and he was detained.

When the officials examined the man’s ID card, they noticed that it was his birthday. Later that night, officers surprised him with a cake and sang him “Happy Birthday.”

The authorities advised the man to stay away from narcotics. He expressed gratitude to them for celebrating his birthday and promised that after serving his sentence, he will no longer be involved with drugs.

BuffaloWhisperer
4 hours ago, Thaiger said: The 33 year old man claims says he had never blown candles on a birthday cake before. Looks like he's going to get lots of practice in prison.

Bluesofa
36 minutes ago, BuffaloWhisperer said: 5 hours ago, Thaiger said: The 33 year old man claims says he had never blown candles on a birthday cake before. Looks like he's going to get lots of practice in prison. Ooh dear,…

Dedinbed
Patient " Doctor I get indigestion everytime I eat birthday cake " .. Doc' " try taking the candles off the next one " ..

Bluesofa
1 minute ago, Dedinbed said: Patient " Doctor I get indigestion everytime I eat birthday cake " .. Doc' " try taking the candles off the next one " .. That's heartburn.