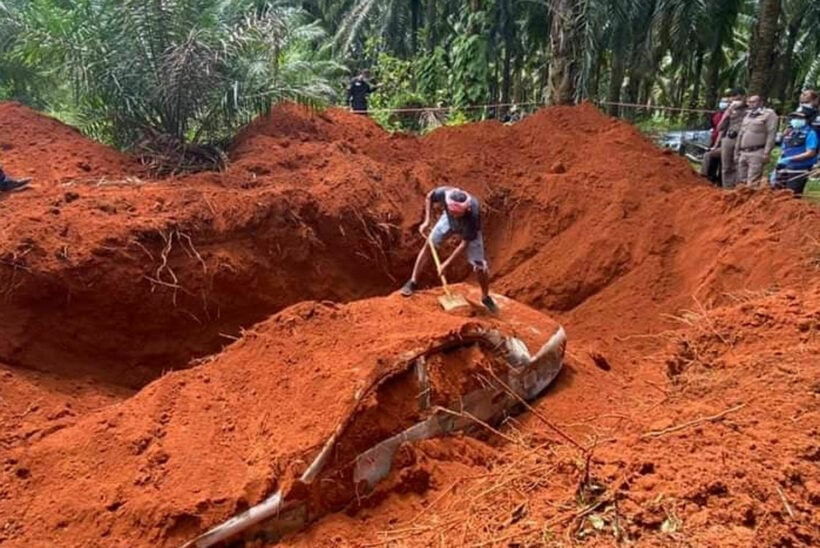 Police in Krabi are searching for 3 brothers suspected of shooting a man before dousing his body in acid and setting him on fire. The body of 54 year old Suchart Khaoluan was found buried in a rubber plantation after he was reported missing for 2 weeks.

Suchart had been missing since May 3. One of the suspects, 32 year old Suriya Roengsamut, know as Bang Fit, owed him 300,000 baht. Suchart had left the house that day to collect the debt but never came home.

An anonymous message was sent to Suchart’s relatives saying that his Suchart had been murdered and that his body, as well as his car, were buried in the Nong Thale subdistrict.

Police searched Bang Fit’s home in the subdistrict as well as the plantation around the house. No one was home during the search. Officers noticed a mound of dirt about 200 metres from the house and brought in a backhoe to excavate the area. They found Suchart’s scorched car. Officers continued to search the area and found Suchart’s body about 2 kilometres from the home.

The Krabi provincial court has issued arrest warrants for Bang Fit along with his brothers, 32 year old Suwit and 38 year old Surachai. The men face charges of collusion in premeditated murder, illegal detention, destroying evidence, arson, illegal possession of weapons and illegally carrying them in public.

Police are still investigating and suspect the men fled the province.