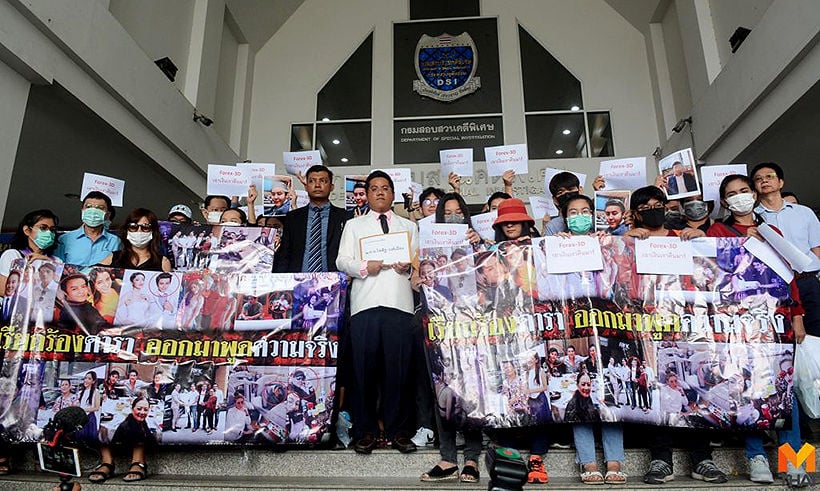 At least 1,000 people have fallen for the ‘Forex-3D’ Ponzi scheme, with losses currently estimated at 10 billion baht. Victims and their lawyers have already filed reports with the Department of Special Investigation (DSI). Dozens showed up in front of the DSI HQ with posters showing the faces of people allegedly connected to the scheme. Victims have asked the DSI to speed the prosecution process and to create a QR code that will allow victims enable file their complaints online.

Forex-3D started as an invitation-only brokerage company, splitting profits at a rate of 60/40 with 60% to the investor. Members (investors) started with a minimum investment of 2,000 US$, or about 50,000 baht.

The company advertised that investments would be repaid at an extremely high dividend rate within a short period. But it began having problems repaying investors in April and didn’t respond to their queries. Victims became so confused and angry that they joined in a cursing ceremony at the company’s headquarters, aimed at the directors and those involved.

There are rumours that celebrities and some government officials have been victims of the scheme, and victims with many social media followers influenced others to invest. Victims have demanded that celebrities and others captured in photos with the company’s directors give the public an explanation. It’s now up to the DSI to decide how to investigate and who to prosecute.

Forex-3D has posted on Facebook denying being a Ponzi scheme, saying any incidents that may have happened were caused by members acting illegally, and that the company has no connection to such activities. Victims say that if the company is truly innocent, they should have no problem visiting the DSI in person.

Last week the Justice Minister, Somsak Thepsutin, handed a case, where at least 2000 victims were allegedly cheated out of more than 430 million baht, over to the DSI as well.

The ”Mae Manee pyramid scheme” was allegedly run by a couple who offered returns of up to 93% a month. The alleged architect of the scheme was using a fake profile as part of the scam.

Last Tuesday October 29 the Criminal Court approved warrants for the arrest of 28 year old Wantanee Tippaveth, aka. Mae Manee, and her 20 year old boyfriend Methee Chinnapha. They face charges of public fraud, illicit borrowings and the input of false data into a computer system.