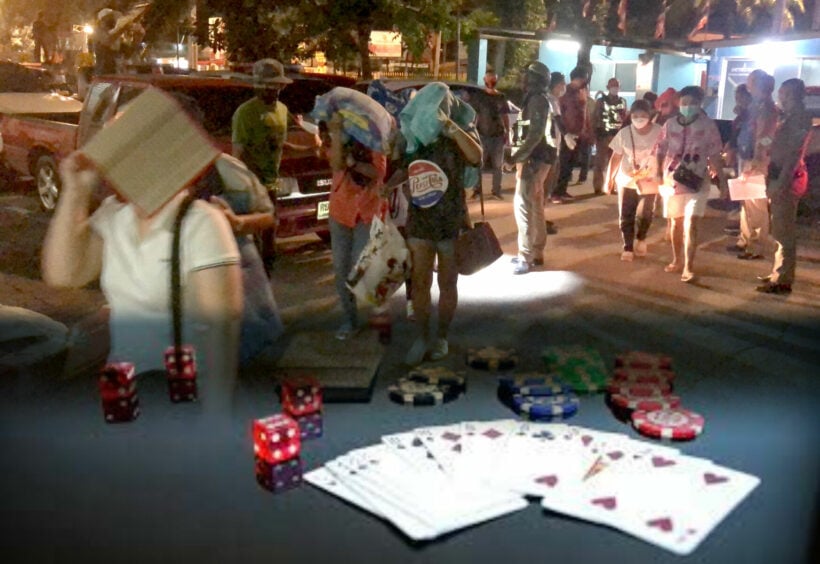 The raid stretched for over 5 hours with the police arriving around 3 pm and not finishing their investigation and arrests until 8:30 pm according to witnesses on-site at the time. Chon Buri Provincial Police took the 30 people accused of illegal gambling at the resort into custody and transported them to the Bang Lamubg Police Station where they will face multiple charges stemming from the gambling and also for violating Covid-19 restrictions.

Police seized as evidence gambling cards and equipment as well as an undisclosed amount of cash at the scene of the alleged gambling den. An investigation is being carried out into the alleged betting venue as well as the 30 people arrested, who are scheduled to go before a judge later.

Thailand has some of the most strict laws regarding gambling, which is completely outlawed in the country. It has also been traced to be the source of a significant amount of Covid-19 outbreaks and is said specifically to be a contributing factor to the spread of the virus in the Eastern provinces.

The Emergency Decree still in effect in Chon Buri also prohibits all large gatherings, for the exact reason of avoiding Covid-19 spread that gambling dens previously proliferated, so those arrested will face additional charges for violating the decree, which itself can carry up to 40,000 baht in fines and 2 years in prison.

Grumpyoldman
I bet you 1000 baht nothing much happens to anyone in this incident.

KaptainRob
I believe a standard fine for 'gambling' is 600bt, so not a bad tea collection from just the patrons.

mickkotlarski
2 hours ago, HiuMak said: it's a joke mate, smiley on. Besides all horse racing in the world serve as a purpose of some form of wagering.  Ohhh. Sorry old boy. Just for a minute I thought the sarcasm was…