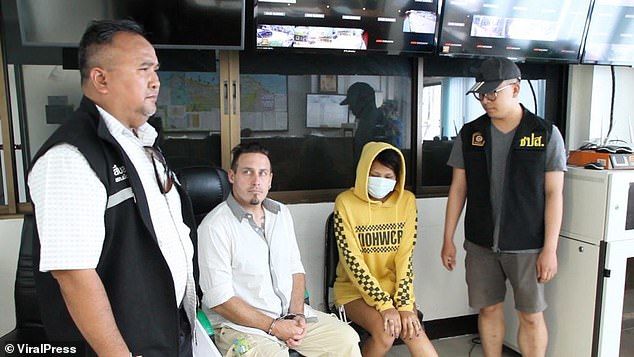 PHOTO: Bart Helmus and his Thai wife during an earlier police questioning session in Pattaya

39 year old American Bart Allen Helmus has finally been taken off life support at the Sa Kaeo hospital at 6pm last night. He had been reported to be ‘braindead’ by police sources since his admission to hospital a week ago.

After having been declared braindead by numerous unconfirmed police reports, and having his other major organs being kept alive since a dramatic showdown with police in Sa Kaeo in which he shot himself in the head, Mr Helmus’ condition has deteriorated.

You can read more about the circumstances leading up to Mr Helmus’ shooting himself in a sugar cane plantation near the Cambodian border HERE.

There had been confusion in the Thai media over his death and condition since the shooting, but multiple Thai police officials confirmed he was ‘alive’ but declared braindead by attending doctors. His vital organs had been kept alive on life support and the US embassy had been involved with the situation since he shot himself in a short stand-off with police last Friday.

No official statement has been issued other than saying that Mr Helmus’ organs had stopped responding to treatment.

It wasn’t clear if he was removed from life support before his organs “stopped responding”.