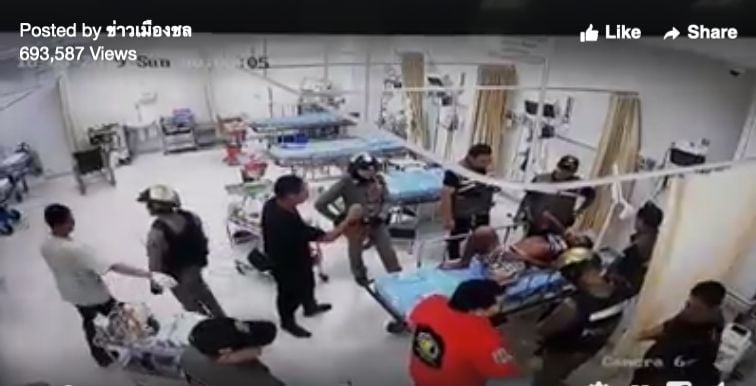 As posted on The Thaiger Facebook page earlier today, originally from ข่าวเมืองชล (Chon Buri News), a video shows an unidentified Thai “volunteer” (the uniform could be a volunteer rescue official) savagely beating up a suspect whilst he was laying in his hospital bed. The video was filmed at Chon Buri’s Burapha University Hospital, 30 kilometres north of Pattaya, whilst other uniformed police watch on as idle spectators.

Firstly, the police officers look around, checking for CCTV cameras, before closing the curtains and getting to work on the man on the bed. The man was beaten with force at least eight times in the video.

Posted by ข่าวเมืองชล on Tuesday, 27 August 2019

Workpoint News reports that Prakasit Seuksongkram, the Permanent Secretary for Defense of the Chon Buri district has already admitted that the attack took place. He is placing the blame squarely on the shoulders of the ‘volunteer’ who says he was angry about injuries inflicted on a friend by the suspect who was in a road accident.

That incident was filmed around midnight on Sunday, August 18, when a 20 year old man (the man on the bed) allegedly ran into 57 year old volunteer Kwanchai Changlek, who was helping direct traffic near a local U-Turn. Thai Rath reports that the man ended up with head wounds and two broken legs after being hit with the motorcycle.

According to Coconuts Bangkok, Suriya Prongnamchai, the director of the Burapha University Hospital in Chon Buri, says that nurses “tried to stop the officials” but weren’t unable to stop them.

“There were only female nurses around at the time of the incident. Imagine if you were that woman standing nearby and many officers barged in. Would you dare to stop them? You think you can fight them?,” she said according to Coconuts Bangkok.