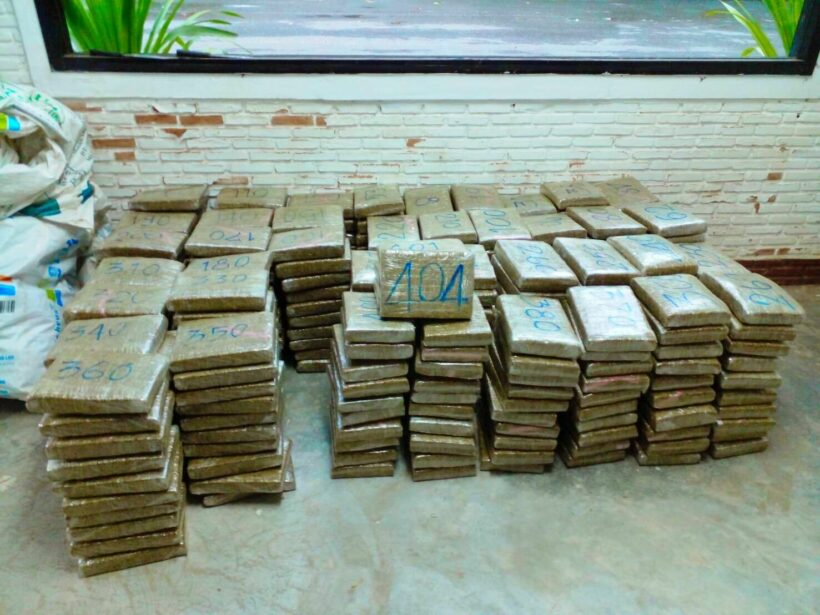 Police in the Isaan province Nakhon Phanom seized 470 kilograms of compressed marijuana valued at around 10 million baht and arrested a 26 year old man on drug charges.

Officers in the province’s Sri Songkhram district stopped a Mitsubishi Pajero which was travelling from Ban Phaeng, a district along the Mekong River bordering Laos. Police searched the vehicle and found 11 sacks with a total of 470 slabs of compressed cannabis. Each slab weighed one kilogram.

The driver, 26 year old Supicha Pannok from Nakhon Ratchasima, was arrested. He allegedly told police that he was paid 50,000 baht from a man in Bangkok to pick up the marijuana, which had been smuggled to Thailand from Laos. A report from the Bangkok Post says the marijuana was destined for overseas.

At a press briefing today, the investigation chief of the Provincial Police Region 4 said that, since the pandemic, a total of 2 to 3 tonnes of marijuana has been seized each month in the border province. There has been an uptick of drug seizures in Thailand’s Northeast region as many drug traffickers have changed their routes to use Laos as a transit country from Myanmar production bases due to the tightened patrol in Thailand along the Myanmar border.

Earlier this month, Mekong Riverine Unit officers in Nakhon Phanom seized 560 kilograms of dried cannabis and arrested four people. Some of the marijuana had been packaged and was ready to be sent out by a delivery service while other 404 kilograms of marijuana was found along the Mekong riverbank.

Rain
21 minutes ago, JTCarius said: Have you ever read Jack's book, The Emperor Where No Clothes? An underground classic.

FlipFlopArmy
35 minutes ago, JTCarius said: Have you ever read Jack's book, The Emperor Where No Clothes? No ! Will do Thanks for the tip !

JamesE
13 hours ago, FlipFlopArmy said: My pharmacy has like 2 dozens of different strains down to 0.5 THC / 5% GPD . Saliva : indica , hybrid each to his own I guess. I like the Jack Herrer Hybrid from…
Old_queer
Where are Cheek and Chong when you need them?

Rain
1 hour ago, Old_queer said: Where are Cheek and Chong when you need them? Tongue-n-cheek and chong.