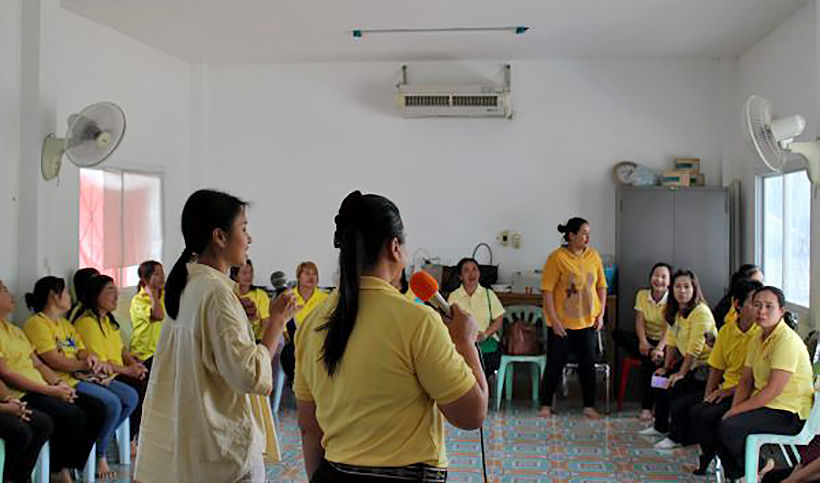 PHOTO: Workshop in progress at the Chiang Rai-based Center for Girls – center4girls.org

A non government organisation in Chiang Rai reports that it has helped a 13 year old girl escape a forced marriage to a 50 year old man.

The Centre for Girls posted on their Facebook page that the organisation received a note from the girl, “Nu Na,” pleading for help. She said her parents were forcing her to marry a 50 year old man as soon as she finished high school.

“I don’t want to get married yet. I want to keep going to school.”

“My mom is forcing me to get married, but I don’t want to. I want a scholarship so I can keep going to school. I want to go to school outside. Help me. I want to study.”

Nu Na’s friend had taken part in a Centre for Girls workshop on children’s rights and learned that child marriage is a violation of children’s rights. This friend told her to seek help and delivered the letter.

Nunnaree Luangmoi, founder and director of CFG, said Nu Na’s family had financial problems and owed the man money. She said that the man may have given the parents an ultimatum: repay or give him their daughter instead. According to Nunnaree CFG doesn’t have the authority to separate children from their parents, and the government can’t help because no crime had been committed at that stage.

Since they weren’t able to remove Nu Na from her family, a team from the Centre went to see the man. He said had bought the girl a mobile phone, and her mother had urged him to take her out. The team took a copy of the Criminal Code and explained the legal penalties the man would face if he married the child.

The alleged groom denied everything, saying that he didn’t think of Nu Na in that way. He said he only likes her and bought her a mobile phone because she was a good student.

According to a CFG spokesman, one of Nu Na’s older sisters has already been married off. She said the parents were violent toward their children and claim that because Nu Na is their child, they can do anything with her.

They have been talking to the parents for several months.

When CFG was organising a children’s camp, Nu Na asked to go with them. She told the workers that she wasn’t staying at her home anymore. Ultimately the organisation were able to convince the parents to let Nu Na leave home and go to school.

Nu Na has been referred to a shelter, where she now lives and has transportation to a nearby school everyday.

Woman sues daughter and bank for stealing over 250 million baht