Fires continue to rage in the northwestern province of Mae Hong Son over the weekend. One of them got very close to a revered Guan Yin shrine in Muang district last night (Sunday).

A fire broke out in the forest behind the shrine on the Mae Hong Son bypass in Ban Mai Ngae village of Tambon Pang Moo at 7pm, surprising and scaring villagers and motorists.

Fire fighters quickly dug a buffer zone about 10 metres from the shrine and houses to prevent the blaze from spreading while fire engines moved in to attack the fire.

Almost simultaneously, another fire broke out on a mountaintop near Ban Mai Ngae and spread to Ban Pong Daeng and Ban Soppong villages, damaging some 50 rai of forest.

Kampanat added that northern province continued to be hit with multiple fires because the villagers wanted to burn the forests in the hope of promoting growth of mushrooms when the rains come.

Kampanat said his station had to dispatch officials to work with fire fighters of the Forestry Department and troops and fire fighters of the Muang Mae Hong Son Municipality to fight the blazes around Muang district. He reiterated that the fires were set intentionally by certain locals.

Tambon Pang Moo and Tambon Pha Pong were the hardest hit by the forest fires.

Forest fires in Mae Hong Son intensified after the government lifted a ban on weed burning on April 30. After the ban ended, farmers burned their fields, causing a rise in smog and air pollution. 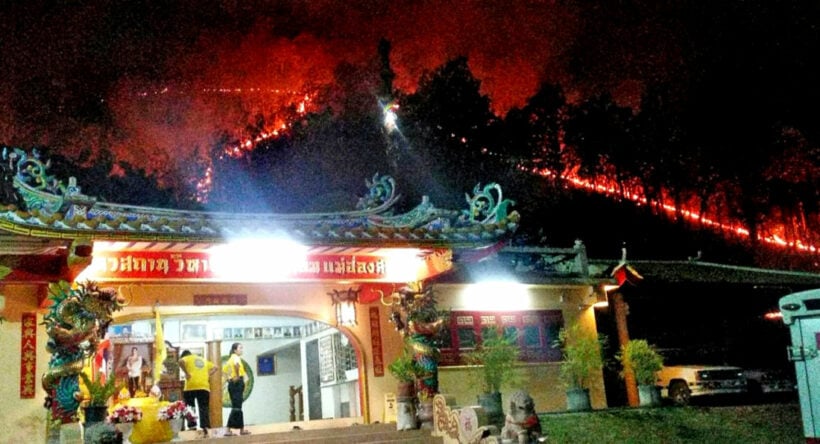