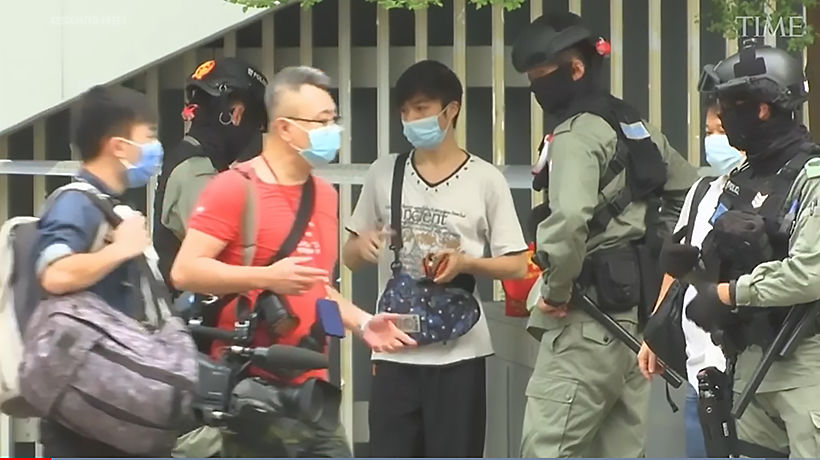 Hong Kong, the former British colony that’s been rocked by often violent protests for more than a year, may at last see a ray of hope – for some of its 7 million residents, at least. If China doesn’t suspend its plans for a draconian security law in the largely autonomous territory, British Foreign Secretary Dominic Raab says the UK could offer British National (Overseas) passport holders in there a path to citizenship.

The law, which makes it a crime to undermine Beijing’s authority, including “insulting the national anthem,” prompted fears Hong Kong’s unique status could end, a fear confirmed yesterday when US President Donald Trump signed a measure stripping it of its special trade status.

There are 2.9 million people in Hong Kong eligible for the passport. China says it reserves the right to take “countermeasures” against the UK.

China’s Foreign Ministry spokesman says the UK and China have agreed that holders of BNO passports should not enjoy UK residency.

“All such BNO passport holders are Chinese nationals and if the UK insists on changing this practice it will not only violate its own stance but also international law.”

There are already 300,000 BNO passport holders in Hong Kong who have the right to visit the UK for up to 6 months visa-free.

But the Home Office confirmed that the proposed new rights, allowing those eligible to spend 12 months in the UK without a visa, could be offered to anyone with BNO status as long as they applied for and were granted the passport, opening it up to 2.9m Hong Kong residents.

Home Secretary Priti Patel said she was “deeply concerned” at China’s proposals for a national security law in Hong Kong.

“If China imposes this law, we will explore options to allow British Nationals Overseas to apply for leave to stay in the UK, including a path to citizenship. We will continue to defend the rights and freedoms of the people of Hong Kong.”

Raab’s statement came after the UK, US, Australia and Canada issued joint statement condemning Beijing’s plan, saying imposing such a law would undermine the “one country, two systems” framework agreed before Hong Kong was handed over to Chinese rule in 1997.

The framework guaranteed Hong Kong some autonomy and afforded rights and freedoms that do not exist in mainland China.

It comes as US President Donald Trump described the Chinese government’s plans in Hong Kong as a “tragedy,” and announced he would start to end preferential US treatment for the city in trade and travel.

China has rejected foreign criticism of the proposed law, which could be in force as early as the end of June.

Announcing the possible change in policy, Raab said the 6 month limit on stays in the UK for BNO passport holders would be scrapped.

“If China continues down this path and implements this national security legislation, we will remove that 6 month limit and allow those BNO passport holders to come to the UK and to apply to work and study for extendable periods of 12 months and that will itself provide a pathway to future citizenship.”