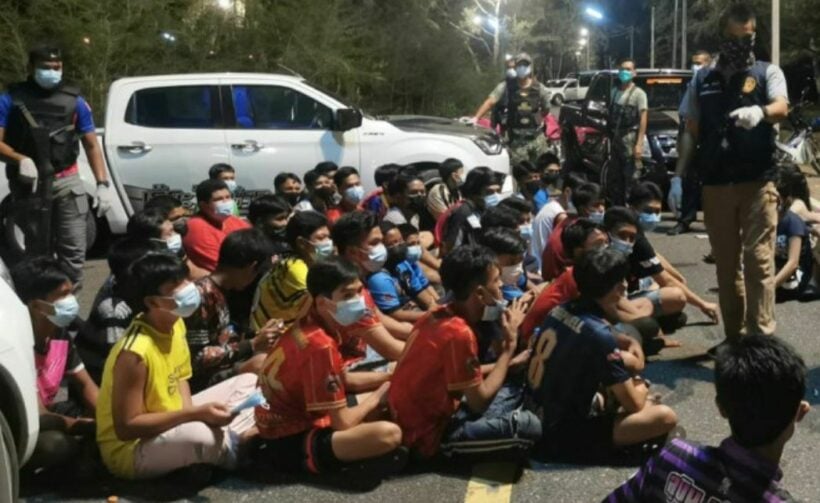 A reckless birthday beach party in Songkhla in violation of several Covid-19 restrictions resulted in 61 arrests, half of which were underage. Songkhla is a dark red zone, where any gathering with alcohol is prohibited and non-alcoholic gatherings are limited to a maximum of 5 people.

Last night on Wang Nao Beach in Nath Thap sub-district of Songkhla, 61 people completely disregarded the rules and met on the beach, apparently to celebrate a birthday. The group was made up of mostly teenagers and young adults who were seen drinking alcohol, partying and mingling on the beach. Many were reported to be socialising without any masks or social distancing for Covid-19 safety when the Khuan Meed Police arrived.

Many people have been caught – and countless more have not been caught no doubt – secretly gathering for parties and events, but this group did not seem worried about keeping their violations hidden. Music was blaring from parked cars nearby as people partied and drank openly on the beach.

The governor of Songkhla confirmed the beach party events and said that the merrymakers were not only violating the national emergency decree for Covid-19 but were also breaking the rules of Songkhla Provincial Communicable Disease Committee orders and may face prosecution on both counts. Emergency decree violations can carry up to 2 years in prison and fines of up to 40,000 baht.

The adults in the group were transferred to Na Thawi Provincial Court to face charges for their Covid-19 restriction violations. The governor hinted his anger at the beach party putting the whole Songkhla community at risk and warned they may receive the maximum penalties for their crimes.

Those who were underage will instead face sentencing at Songkhla province’s Juvenile and Family Court. They will face similar charges and punishment for violating Communicable Disease orders and the emergency decree. The 30 partygoers that are under 18 may also face additional charges for underage drinking.

AlexPTY
I read quite a few news like this, but haven't heard of anyone actually being fined or put in jail. Correct me if I am wrong please

King Cotton
1 hour ago, AlexPTY said: I read quite a few news like this, but haven't heard of anyone actually being fined or put in jail. Correct me if I am wrong please  Doubts shared by most members I reckon, espec…

MrStretch
Couldn't have been too much of a "party", based on the pic.  Looks like a Thai sausage fest.
Stardust
8 minutes ago, King Cotton said: Doubts shared by most members I reckon, espec when the report can only tell us . . .  'The governor of Songkhla confirmed the beach party events and said that the merrymakers were not…
Objectivance