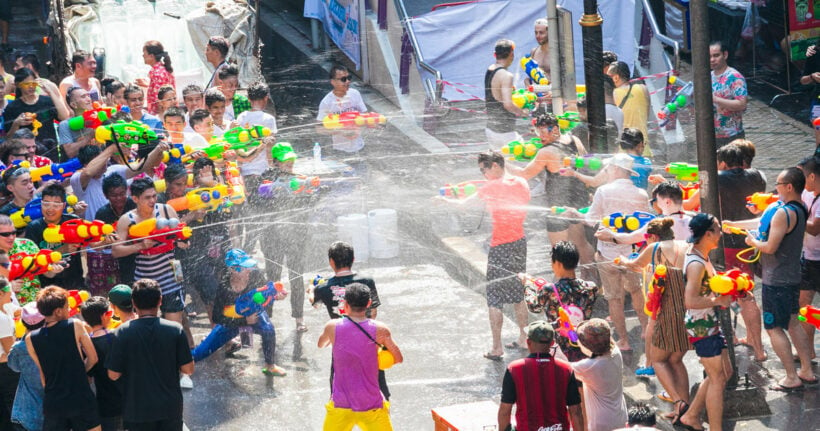 The spread of the COVID-19 coronavirus prompted tourism industry leaders in Phuket this week to support moves to cancel or postpone mass events across the island. All official Songkran Thai New Year festivities in the southern resort island’s Patong district have already been cancelled, along with the annual Phuket Bike Week, usually the biggest motorcycle event in Asia. Even the popular Lard Yai Phuket Walking Street ‘night market’ in Phuket Town (in Thalang Road on Sunday nights) was not spared.

In a move sure to rattle working parents, school “summer camps” in all 19 of Phuket’s municipalities and local districts have been cancelled, meaning children will be staying home for several weeks. The camps basically provide day care for young children during the Thai school holidays, which began yesterday.

Dr Chayanon Pucharoen of PSU, Phuket’s Faculty of Hospitality and Tourism, estimates that the plunge in international arrivals to Phuket has already cost Phuket 12-15 billion baht in lost tourism revenue.

“The cancellation of major events will cost Phuket even more. It is already bad, and March is not going to get any better. It might be even worse in April, but it is hard to predict at this stage.”

On Wednesday, Interior Minister Anupong Paojinda announced that Thailand was cancelling visa on arrival for 18 countries and territories, and visa exemption for three others. While the move has been delayed indefinitely, the number of international tourists coming to Phuket is likely to fall further as a result. Thanusak Phungdet, President of the Phuket Chamber of Commerce, publicly supported the cancellation of mass-gathering events.

“I prefer Phuket to close down for at least 2 months. It is better than an outbreak affecting Phuket for 10 months.”

“But I can’t make any decisions about this. Protection is the most important factor right now, as is confidence in Phuket Governor Phakaphong Tavipatana. It’s his job to make people feel confident about his actions.”

“For now, it doesn’t matter whether people are holding small or big gatherings. We must be concerned about who joins the gatherings. We need to control this, and people need to avoid exposing themselves to risk.”

“But the sense of fear is rising, and not helping”, Mr Thanusak noted, when asked about the move this week by three major national banks to close all their currency exchange booths quarantine all staff involved in foreign exchange transactions.

“That is the reaction of the bank, and people are worried about the coronavirus. It’s not necessary to close exchange booths, it does not help. For this they could just use hand sanitiser to protect their staff.”

Recent measures in Phuket saw more than 2,000 passengers and crew on the Costa Fortuna cruise liner being denied permission to disembark in Patong on March 6, because 64 Italians on board had left Italy in the previous 14 days. The ban followed the Thai government instituting a 14-day quarantine on all people arriving from the six “risk areas” just a day earlier.

Patong’s Mayor Chalermluck Kebsup confirmed to the press that all official Songkran celebrations in the tourist town had been cancelled.

“People still can enjoy their water play on Bangla Road. We don’t have any authority to ban people playing with water during the festival. They can if they want to.”

Vice President of Government Relations at the Phuket Tourist Association, Sarayuth Mallam, praised the move by organisers to cancel or postpone major events.

“Preventing large crowds at events attended by foreigners and Thais is good. It shows people are wary of the virus spreading in Phuket and want to avoid the risk of an outbreak. The coronavirus is serious, but I am not asking people to cancel all events. Happy activities should go on. There is no need to cancel every event or activity.”