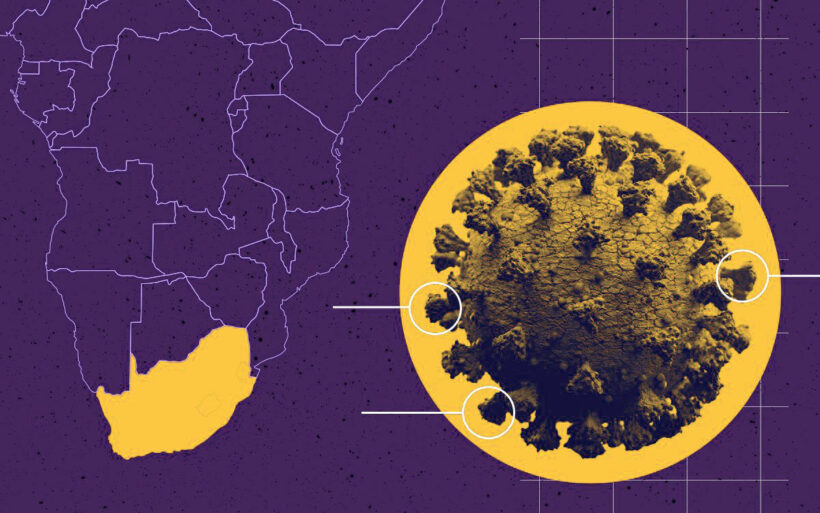 Countries around the world are pushing back against the latest strain of Covid-19, now officially called by its Greek alphabet name ‘Omicron’, or B.1.1.529 if you want to be scientific.

Meanwhile, Thailand is banning entry of travellers from 8 African countries. The Public Health Minister today announced that no Omicron cases had yet been detected in Thailand.

The South African Health Minister, Joe Phaahla,, says that it initially looked like some cluster outbreaks.

“But from yesterday, the indication came from our scientists from the Network of Genomic Surveillance that they were observing a new variant.”

And a professor of Public Health and Microbiology at the University of Cambridge has confirmed that, while the overall number of Covid infections has been relatively low in South Africa, “there has been a rapid increase in the past seven days”.

“While the significance of the mutations and their combination is unknown, some of those present in the latest variant have been associated in others with immune evasion.”

The WHO have praised South African health officials for their “quick reaction to a Covid-19 outbreak”. The first detections were in South ’Africa’s Gauteng province, leading to the discovery of the new variant. But at this stage scientists are unable to determine where the new strain emerged exactly.

The World Health Organization has already put the new variant at the top of its list as a “variant of concern”.

Omicron has already been detected in Botswana, Hong Kong and Belgium.

Worryingly for South African scientists, the new variant appears to be spreading rapidly around South Africa. They say they are concerned its “unusually high number of mutations could make it more transmissible and result in immune evasion”.

Another health official in South Africa yesterday said that Omicron was “spreading very fast, and we expect to see pressure in the health system in the next few days and weeks”.

Following Friday’s official announcements, parts of the world have sprung into action, with flights banned out of southern African destinations.

The EU Centre for Disease Prevention and Control says there is a “high to very high” risk the new variant will spread in Europe.

South African officials announced on Thursday that there was one confirmed case from a traveller from South Africa to Hong Kong. Hong Kong health authorities followed up on Friday by identifying a second case of Omicron among returning passengers who were on the same floor of a quarantine hotel.

The Belgian government has also confirmed that 1 individual who had recently arrived (from an unspecified location), and was unvaccinated, had tested positive for the new variant.

Speaking to CNN, Lawrence Young, a virologist and professor of molecular oncology at Warwick Medical School in the UK, says Omicron is “very worrying.”

“It is the most heavily mutated version of the virus we have seen to date…. It carries some changes we’ve seen previously in other variants but never all together in one virus.”

LoongFred
8 hours ago, HolyCowCm said: Yeah, but there might be time as new variants emerge to use XI. Maybe that will have to be used when it becomes the most dangerous fatal mutation and the WHO has their head finally…
DwizzleyMatthews

AussieBob
On 11/28/2021 at 9:46 AM, Dr.Sivada said: Don’t be naive, people die everyday, unfortunately. It is not desirable but it does happen: the side effect of living. Based on you silly logic, driving should be forbidden due to the death…

AussieBob
14 hours ago, Soidog said: Hi, I wasn’t referring to any specific strain or variant, more the general approach some people have towards the additional millions who have already died and could go on to die by simply opening up…

Soidog
8 hours ago, AussieBob said: Well said mate - too many 'me me' people not looking at the big picture - not enough 'us us'. If they tried to eradicate Polio these days, it would not work now because of…