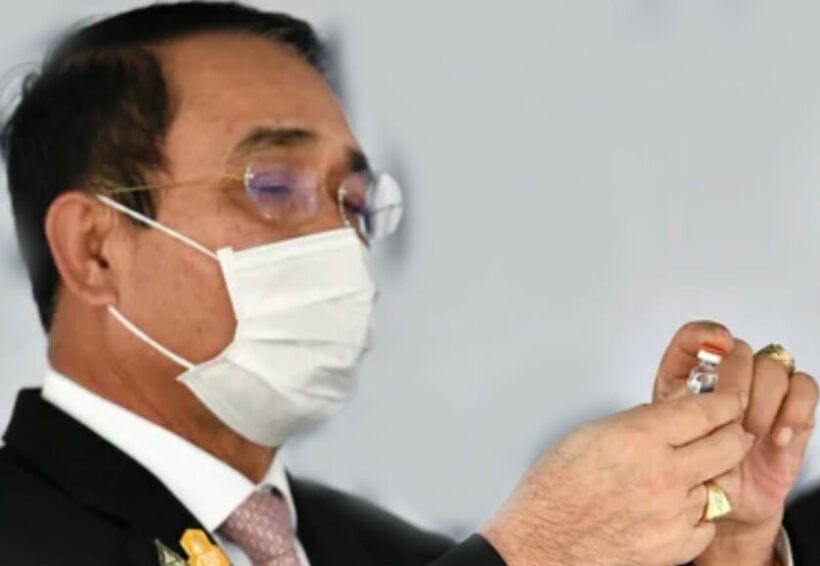 PHOTO: PM Prayut comtemplates how to get a hundred million of these vaccines to the people of Thailand. via Hindustan Times

Corporations are losing faith in Thailand’s political leaders as many in the medical, financial and business sector are placing the blame on the Prayut government for the current Covid-19 situation. They claim that corruption and cronyism is hindering and dampening a more decisive and productive course of action.

The Chamber of Commerce has already offered logistical support to expedite vaccinations with private hospitals offering to buy their own vaccines for distribution. Legal hoops by the health ministry are holding up the process along with vacillation from the government about allowing private entities to purchase vaccines, separate from the government.

Thailand ranks 124th out of 154 countries on the percentage of adults who have had at least one dose of a Covid-19 vaccine. And nearly 40,000 new Covid-19 infections have sprung from the third wave over the past 6 weeks.

An online campaign is gaining speed calling for the resignation of Public Health Minister Anutin Charnvirakul helmed by a group called Mor Mai Thon, Thai for “doctors won’t tolerate this”. The campaign has gathered more than 200,000 signatures in the last few days on the recently-reinstated-in-Thailand petition site Change.org.

The strong move puts pressure on PM Prayut who had generally received the support of the middle class and the corporate sector since coming to power in a military coup in 2014. But with the countries medical crisis and shrinking economy, he may be losing that base. Business leaders have been critical of the slow vaccine rollout with the Thai Chamber of Commerce speaking out strongly about the damage to the economy as people are not getting vaccinated.

There’s more at stake here than just the vaccine roll out as the ruling Palang Pracharat coalition relies heavily on the support of the Bhumjaithai Party, led by the current Deputy PM and Public Health Minister Anutin. The public spat between the PM and his minister has resulted in Anutin’s sidelining as Prayut takes control of the country’s Covid levers.

The business and tourism sector are pointing the finger at PM Prayut and his government for failing to distribute and administer the vaccines, and not encouraging citizens to get vaccinated as quickly as possible. Tourism officials believe that the more efficient vaccine roll out in neighbouring countries like Hong Kong, Singapore, and Vietnam will draw the tourists that cannot come into ill-prepared Thailand.

Delays in the domestic production of AstraZeneca by Siam Bioscience has drawn whispered criticism for fear of strong punishment under the countries lese majeste laws. The company has strong links with the Thai royal family.

“Siam Bioscience is a biopharmaceuticals manufacturer founded in 2009 through the King’s Fund, which was set up by the Late King Rama IX to improve health and wellbeing.”

Registration and approval for vaccines from Pfizer, Moderna, and Johnson & Johnson are still hanging in the balance and Sinovac is the main vaccine available in the country so far.

Last year the Thai government enjoyed praise for their strong containment of the Coronavirus outbreak and started this year on a positive note with efforts to acquire 63 million vaccines for half the population. But that praise is fading as missteps are not doing enough to contain the Covid-19 outbreak and vaccinate people against it.

Some political shuffling has taken place within the Thai government to try to quell the angry voices from the medical and business community. The PM has been granted stronger authority as a Covid czar to enforce laws like the Communicable Disease Act, stoking fears of authoritarian abuse. Thammasat University political scientist Prajak Kongkirati sees the move as an act of desperation.

“He has to show that he is doing something because the criticism is coming from his core supporters who he needs for political stability. The anger over vaccines has shaken Prayut’s support base.”