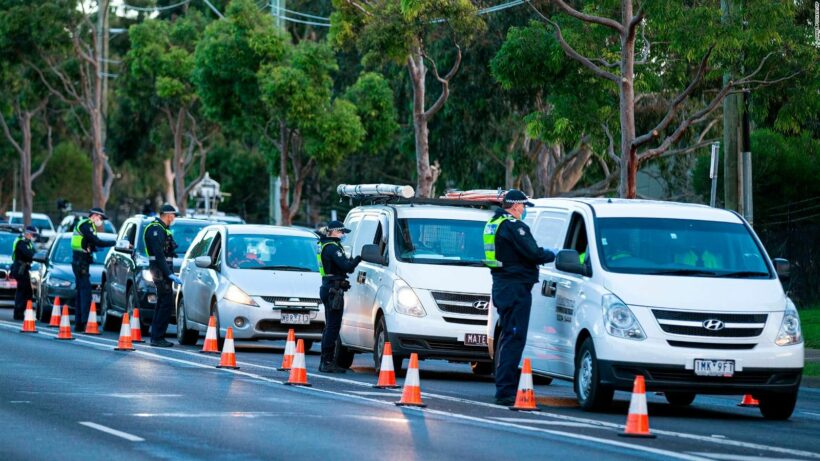 Countries that appeared, only a few weeks ago, to have their local Covid-19 outbreaks under control – Australia, Hong Kong, Singapore for example – are now seeing new waves of the virus drawing immediate attention from officials, locking down the affected areas. They know, for now, it’s the only solution to counter new outbreaks.

These mini-outbreaks in formerly ‘low-risk’ areas draws attention to the difficulties of containing Covid-19, even when countries have been ruthless with border closures, ‘lockdowns’ and quarantine measures.

In Melbourne, Australia’s southern city, it’s been a backward step as the country closed the state border between the states of Victoria and New South Wales, just to the north on the other side of the Murray River. It’s the first time the border has been closed in 101 years, since a similar measure was introduced during the Australian outbreak of the deadly Spanish Flu.

In Singapore the numbers of cases were exactly 1,000 on April 1. Singapore officials were patting themselves on the back and praised for their quick reactions to suppress the spread of the virus in the tiny island state. Then cases started appearing in the accommodation areas where the large migrant worker population live. Today there are now 45,298 cases amongst a population of 5.6 million with at least 100+ new cases still being reported every day. 41,000+ have now recovered and there has only been 26 recorded deaths in Singapore.

Admittedly these case studies pale into insignificance when compared to the US, India, Brazil, South Africa or other countries in South America or the Middle East who are registering 1,000s of daily new cases at the moment. But it raises questions about how parts of the world, hard hit earlier, and now trying to recover their economies, will ever expect to return to anything resembling ‘normal’. Even if they do, the constant fears of another ‘wave’ of the coronavirus, or the prospect of re-opening their borders, is an ongoing challenge.

As well as Australia, Singapore and Hong Kong, South Korea, China, New Zealand, and Israel (1,335 new cases in the past 24 hours), have all reported new Covid-19 outbreaks after initially appearing to contain Covid-19. Thailand has now reached 45 days without a single locally transmitted case but is still reporting fresh cases every day of repatriated Thais flying back to Thailand with the infection.

But, with the the latest knowledge, authorities are able to quickly ‘jump’ on the affected areas and better contain the spread. Most countries now have more developed contact-tracing too, all helping to minimise the spread of 2nd or 3rd waves.

Melbourne had just about fully re-opened when the new cases started showing up in the middle of June and is now reporting 120+ new cases each day, following almost 2 months of single digit daily infection rates for the entire country.

Now city residents are again confined to their homes, unless it’s for food shopping, caregiving, exercise or work. Cafes and restaurants, allowed to reopen just weeks ago, are again closed, going back to their delivery and take-out services again. All entertainment venues are also closed. Victoria (where Melbourne is the capital) is now being isolated from its state neighbours of New South Wales and South Australia.

“The South Australian Government has announced all residents returning from Victoria will be required to take a coronavirus test within 24 hours of their arrival, and wear face masks when coming into contact with others.” The South Australian Premier Steven Marshall says that all travellers from Victoria are required to self-isolate for 14 days, and submit for a coronavirus test.

The closure of the border with New South Wales is the first time such a measure has been taken since the Spanish Flu pandemic, 100 years ago. There are border towns scattered along either sides of the river border that are now effectively cut off from each other. Any Victorians needing to cross the borders have to register with the government and checkpoints have been set up.

The Australian experience with a second wave mirrors the response in China where swift, draconian measures are applied to contain the virus. Without a vaccine, it’s a blunt but effective tool to control local outbreaks of the disease.

Hong Kong is currently debating a return to lockdowns and restrictions. After weeks of relaxation and two months of few new cases, there is now around 20+ new cases each day over the past week. Hong Kong is a particularly concerning location due to close living and cramped streets.  SARS, the Severe Acute Respiratory Syndrome, another coronavirus related to Covid-19,  reached Hong Kong in March 2003. Over 3 months, a total of 1,750 cases were identified. During this time 286 people died of the disease. SARS proved to be even more fatal than Covid-19.

Daniel Andrews, the Victorian premier, says “I think a sense of complacency has crept into us as we let our frustrations get the better of us. I think that everyone knows someone who has not been following the rules as well as they should have. I think each of us know that we have got no choice by to take very, very difficult steps.”

His words ring true for every location in the world where a new wave or isolated outbreaks re-occur.

But in some parts of the world the first wave is still in full flight – countries like the US, Brazil, India, South Africa and other South American nations are currently seeing an acceleration of new Covid-19 infections.

For a developed nation with a world-class health system, the problem in the US is of particular concern, where the pandemic has become highly politicised. Even the wearing of masks, now seen as part of a community’s weaponry against infection, is being flagrantly ignored by sections of the US community who see their refusal to wear a mask as a sign of solidarity with the US President. Even the advice from the country’s Centres of Disease Control is now being openly challenged by some politicians.

Australia, Hong Kong, Singapore and other parts of Asia, that tackled the virus earlier and ‘flattened the curve’ before others,  are showing the difficulty of avoiding new infections, even in the best of circumstances. Where communities are mostly following health authorities’ guidelines, wear masks, are vigilant about social distancing and are educated about the situation… new outbreaks can still occur.

The ‘new normal’ for the world isn’t ‘normal’, but it is ‘new’. It’s been a century since the world suffered the loss of some 50 million people from the ravages of The Spanish Flu (some 500 million were infected with the H1N1 virus according to CDC and Wikipedia). Now, in a new century, with all the technology and accumulated knowledge, we are still finding it difficult to manage a tiny virus.