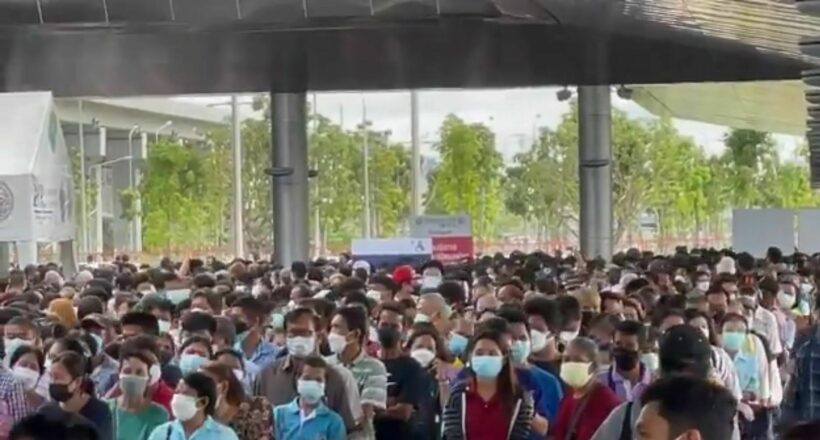 Health minister, and TikTok star hopeful, Anutin Charnvirakul wants to reassure the public that images of crowds of people packing into Bangkok’s Bang Sue Grand Station might be deceptive. Anutin says that viewers might be deceived by “camera angles or whatever” that give the viewer the false impression that there are large crowds at the station.

Yesterday, Anutin said he could confirm the camera trickery because he goes to the station 4 days a week. He says the place is only crowded in the morning, but when he got there it wasn’t crowded. He then dropped his bombshell that, “camera angles or whatever can make a place look crowded”. The health minister did not reveal specifics on what “whatever” could refer to.

The health minister, and man who doesn’t mind pulling his mask down to make a point about foreigners not wearing masks, advises people who want to avoid large crowds, that they should show up for a vaccination in the afternoon. He did not state whether this could also lead to overcrowding in the afternoon.

However, despite Anutin’s evidence, several social media users have posted, what seems to a non-trained photographic eye like Anutin’s, large crowds gathering. A video also captures, from multiple angles, what also appears to be expansive crowds gathering at the station.

Some of the pictures also appear to be taken in the afternoon.

Readers can check out a short video that drives by what may look like a large crowd here.

Anutin has previously defended his integrity by stating, “I know I’m being watched. If I had done something so foolish, it would have been (politically) suicidal”.

Stardust
Photoshop? No from another angle of the shop ?
BookShe
A Nut In

Andrew Reeve
Easy to see this is a topic that you all feel very passionate and angry about. There has been several posts which are not within the forum guidelines and have now been removed.   5. Don’t use obscene or vulgar…
Paco
Oh so tired of this clown and his brainless speaking, count the heads then take the size of the place, what is stated on the internet... and there we are again... the clown is telling lies like always. Maybe time for him to…

Bluesofa
4 hours ago, BIGGLES said: Thanks Anutin! I now know why I look like 6'2 and17 stone. Nothing to do with all that lovely red wine, copious quantities of beer and steak dinners, fillet steak sandwiches with a smattering of…