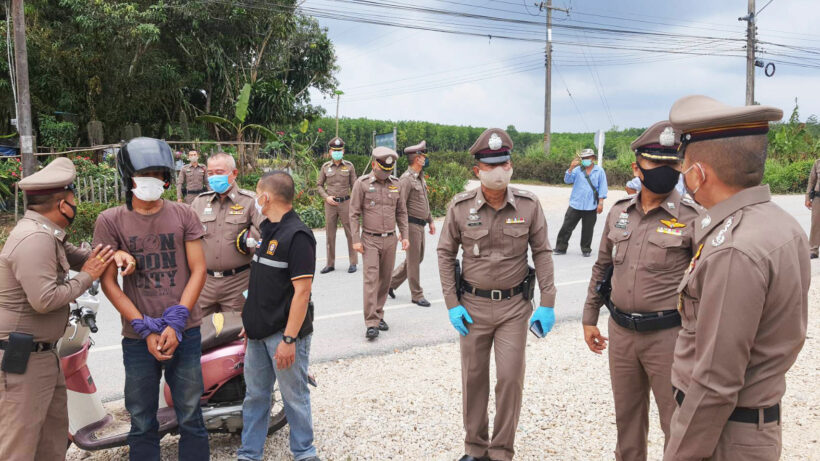 Last night around 10pm a drunk man, apparently desperate to get more alcohol, became angry and aggressive, whereupon he decided to incinerate an ATM machine hoping that it was going to explode and rain cash, or alcohol, in Rayong, south east of Bangkok.

General Montree Yimyam along with officials from the Rotong Police Station, arrested the man, later revealed as 30 year old Kittipong Soisuea , aka. Yo. Yo had admitted to the attempt to burn down the ATM machine that belongs to the Bank of Agriculture and Agricultural Cooperatives.

It is believed that before Yo had committed the crime he was sitting alone in his room drinking Thai rice whiskey. He lives in an apartment close to where the ATM was located. As soon as Yo ran out of alcohol, he wanted more so he decided to leave his room to pursue some more liquor.

Yo drove around on his motorbike looking to purchase alcohol but no stores were open because it was past the curfew time. He then became agitated and came up with the idea of blowing up an ATM. He went to find a gas tank and used it to incinerate the ATM.

Yo kept on re-lighting the fire hoping that the ATM would explode but the ATM lasted longer than his gas supply and he gave up. The ATM was battered and bruised, and blackened, but still intact. Yo went back to sleep in his room.

Big mistake. Yo left his motorbike behind and the empty gas tank right next to the ATM.

The village chief was able to figure out that it was Yo who was the ATM arsonist. He called the police. The suspect claims that he didn’t want the cash inside but merely an expression of his anger and frustration.

This is not the first time the suspect has played with fire. He has previously burned a villager’s car.

Up to 100,000 Thais at risk from alcohol-related ‘withdrawals’ during national ban