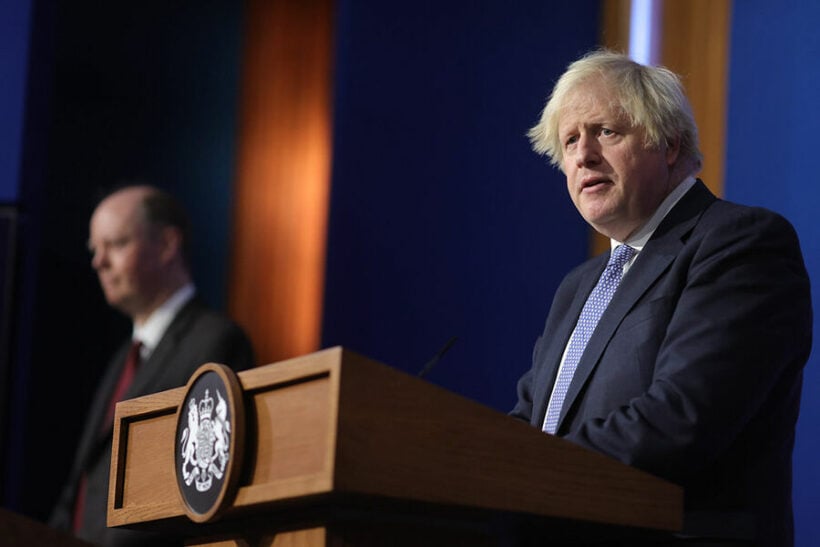 The UK has reported its first death from the Omicron Covid-19 variant as the mutation looks set to become the dominant strain in the coming days. According to a Reuters report, British Prime Minister Boris Johnson says the variant currently accounts for 40% of infections in London. The government has introduced tougher restrictions and Johnson is urging people to come forward for booster vaccine doses.

“Sadly, at least one patient has now been confirmed to have died with Omicron. So, I think the idea that this is somehow a milder version of the virus – I think that’s something we need to set on one side – and just recognise the sheer pace at which it accelerates through the population.”

Reuters reports that despite being asked repeatedly if he would rule out tougher restrictions in the run-up to Christmas, Johnson refused to comment. The prime minister has referred to a surge in Omicron infections in London, with his Health Secretary, Sajid Javid saying the variant is spreading at a “phenomenal rate”.

Johnson is facing his own struggles, having to deal with rebellion in his party over stricter Covid-19 restrictions, coupled with public fury over alleged parties at Downing Street during the Christmas period last year, when the country was in lockdown. In the early days of the pandemic, as the virus began to spread in China and beyond, he was criticised for his delay in locking down the UK. He was later slammed for mistakes made in the transfer of patients into care homes and for an expensive testing and tracing system that failed to curtail the spread of the virus.

Johnson continues to defend his actions, saying the government had to make quick decisions during an unprecedented crisis and pointing to the successful rollout of Covid-19 vaccines.

According to the Reuters report, over 146,000 people have now died from Covid-19 in the UK. Javid says that while there are currently just 10 people hospitalised with the Omicron variant, its high transmissibility rate means the government must take decisive action to avoid the country’s health system being swamped.

Rangers
7 hours ago, Fluke said: If the Omicron virus isn't as severe as the previous variants and its only mild , it would mean the end of the pandemic and we can all get back to normal Some people don't…
vlad
9 hours ago, Faraday said: This seems to me as if it's scaremongering. The lockdowns in the UK, & the restrictions, were, according to my sister, gruelling & frightening. There seemed to be light at the end of the tunnel,…
vlad
1 hour ago, Fluke said: Is that the care homes where the elderly go to live out their final years / months / days ? Where are they expected to go fluke when there struck down with dementia and bed…
vlad
7 hours ago, Fluke said: They are still doing tests on the Omicron virus and initial results suggests that its not as severe as the previous variants and it is quite mild . Thats not a wish, that's scientific…
Stardust
10 hours ago, Faraday said: And ....we're off!! 🐎 "Died with Omicron" I haven't seen any details about the person, such as age, pre- existing factors, or whether they just died of natural causes. Was the person vaccinated...? The first…