Public Health Minister and Deputy PM Anutin Charnvirakul appears to have gotten his way, and bars and entertainment venues in Bangkok are rattled today, after the government announced a mandatory closure over the Covid-19 coronavirus. The move comes a day after the announcement that Songkran festivities nationwide are postponed to as-yet undecided dates.

The planned steps come as new cases nearly tripled in a single week to reach 147. Thirty-three new infections were reported yesterday, breaking Sunday’s record of 32. Thirty more were confirmed today. One person in Thailand has died of complications arising from the illness.

Deputy government spokeswoman Ratchada Thanadirek said on her Twitter account that the cabinet was expected today to approve closures of all universities, public and private schools, boxing arenas, cockfighting arenas theaters, bars and other entertainment venues in Metropolitan Bangkok.

Cockfighting is legal and extremely popular in Thailand.

Metropolitian Bangkok includes Nakhon Pathom, Nonthaburi, Pathum Thani, Samut Prakan and Samut Sakhon. It does B include Pattaya or Phuket, this is not a country wide closure, but limited to areas where clusters have been found or suspected. Earlier, Ratchada said that closures of entertainment venues elsewhere in the country would be at the discretion of the provincial governors.

The temporary closure will be from March 18 to 31.

In a press conference today, PM Prayut Chan-o-cha emphasised that this not a “lockdown” and stressed that the use of this word is highly incorrect, as people remain free to move around, only that areas where large numbers of people tend to gather in Bangkok would be shut. Malls and Restaurants are not affected by the order but need to ensure they are following proper hygiene and precautionary standards and limiting large gatherings.

The Government stressed the country remains at Stage 2, that there is not widespread public transmission and that these measures are temporary. The order also prohibits general mass gatherings, including religious activities.

Deputy Prime Minister Wissanu Krea-ngam says restaurants will “probably be allowed” to remain open, but only if they take precautions against coronavirus contagion such as social distancing, and that two clusters of infections, linked to a bar and a crowded boxing stadium, showed the need to limit public gatherings. He recommended that government employees work from home wherever possible.

“In this situation, prevention and treatment are the number one priorities. We have to prioritize people’s lives over tourism and economic impacts. We don’t know how tough the upcoming battle will be.” 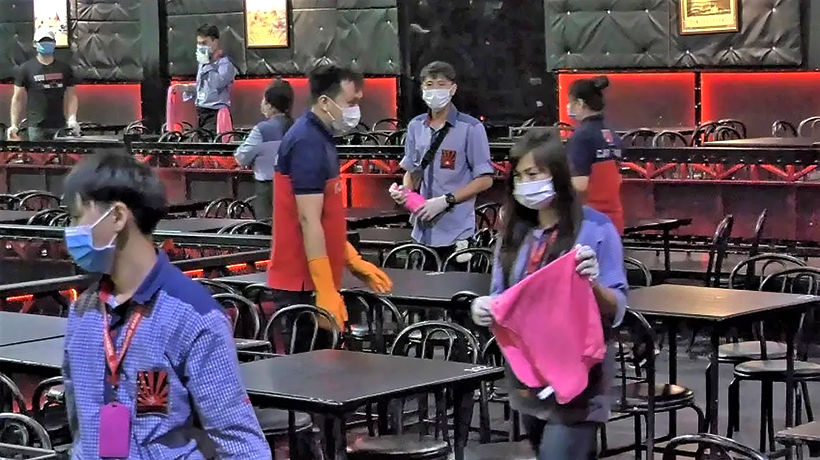 Some businesses have already taken the initiative, temporarily shutting their doors as customer numbers have dwindled. The owner a bar in one of Bangkok’s busiest nightlife districts closed it down for the first time in over 40 years. She says closed it due to a lack of customers over coronavirus fears.

“I think it’s not worth it to stay open. Even if the government hadn’t ordered it, we ought to close ourselves.”