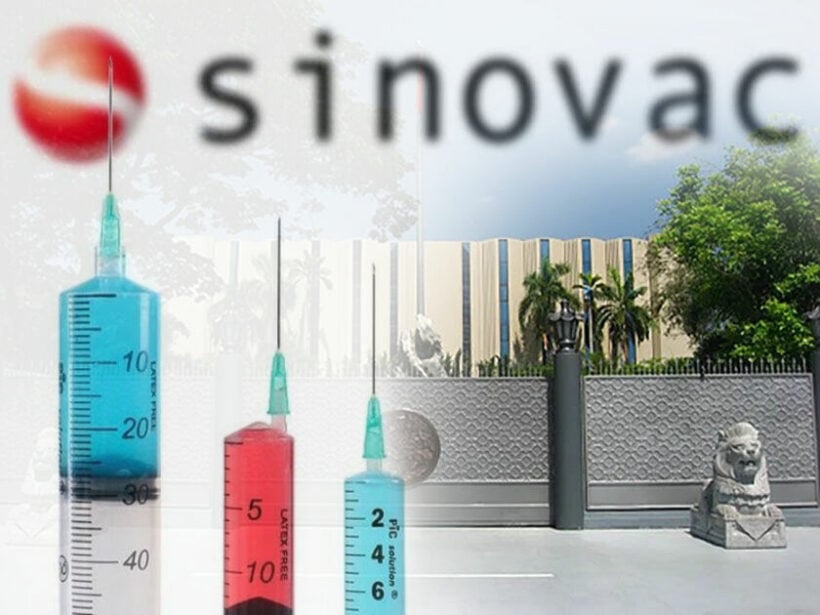 The Chinese Embassy in Bangkok has lashed out at those bad-mouthing the Sinovac vaccine and Chinese goodwill towards Thailand. In a post on Facebook yesterday, a spokesman for the embassy said that organisations and individuals in Thailand trying to discredit the vaccine are doing so without a scientific basis.

The post implied that these detractors should feel some gratitude that China kept a constant supply of vaccines to Thailand despite China’s own need for vaccines with demand outpacing production. The post paints China as a supporting partner to Thailand in the fight against the Covid-19 pandemic.

The Chinese Embassy defended the quality and efficacy of the vaccine by pointing out that it has been approved by the Thai Food and Drug Administration, approved by the World Health Organisation for emergency use, and undergone rigorous testing, research, and human trials. They say that Sinovac has been keeping abreast of Covid-19 variants and constantly studying the effects on those who received their vaccine.

To defend its efficacy the Chinese Embassy pointed to studies by the Public Health Ministry in Chile and the government of Indonesia. In the first study, researchers in Chile said on August 5 that they found Sinovac to be 86% effective in avoiding death and serious illness for people hospitalized with Covid-19. The study in Indonesia was released the next day and found that Sinovac was 92% to 95% effective at stopping infected patients from dying.

Studies around the world have shown that the Sinovac vaccine has been weak in fighting the Delta variant of Covid-19, but studies have also shown that it has reduced illness in infected patients and been very effective at preventing death. The Chinese Embassy ask that those who speak badly about the vaccine in an attempt to discredit it stop their harmful attacks.

They did say though that, despite the multitude of disparaging remarks, China will not stop its cooperation with Thailand in the fight against Covid-19.

Guevara
4 hours ago, Bob20 said: Sounds like a topic for a new section: CCPCC (Chinese Communist Party Conspiracy Corner). It sounds like paraphrenia corner or xenophobia.
Bob20
5 hours ago, Soidog said: We should all start to get use to this kind of thing happening. China, for a number of years now, has been ramping up its campaign to stop anti-Chinese information. It is a deliberate and growing…

Soidog
3 hours ago, Bob20 said: It's been coming a long time Soidog. Now with Google/FB/WhatsApp etc. banned and blocked, most people can't get any truths or even different opinions from the web and it's full-on automatic indoctrination. I can't even contact…
Lawyers_Guns_and_Money
On 9/4/2021 at 10:00 AM, Thaiger said: The Chinese Embassy in Bangkok lashed out at those who have bad-mouthed the Sinovac vaccine and Chinese goodwill towards Thailand. In a post on Facebook yesterday, the spokesman for the embassy said that…

PapayaBokBok
Beware Chinese bearing gifts goes the old saying.. The thais should certainly be careful of their Overlords they fawn over, esp since they tried to blame chinese tourists on the boat fatalities down south.. That went over like a fart…