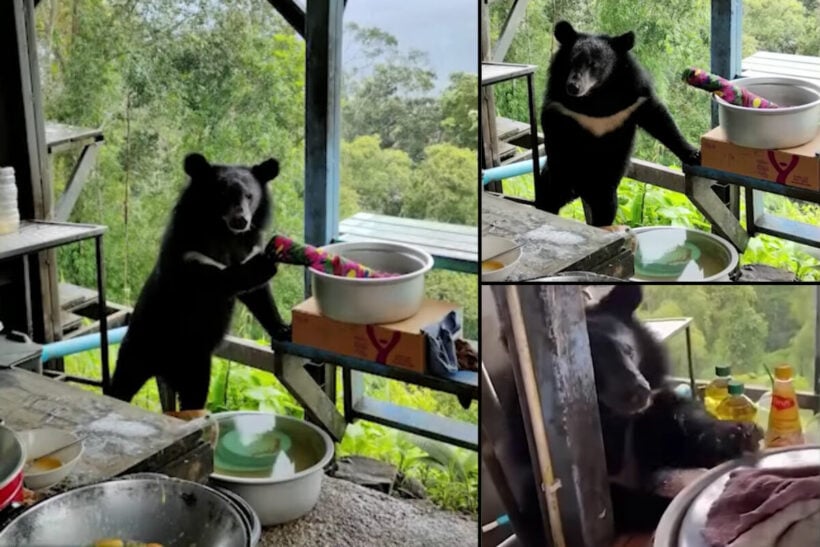 Attendance at Khao Yai National Park has boomed so much thanks to a viral video that they are now having to limit the number of people who can visit. People were drawn to the park after a video was posted to Facebook showing an Asian black bear visiting a food stall in the park attempting to eat an omelette and other food on the counter.

After “Khao Yai Fever” trended on social media when the video of the curious and hungry bear went viral, people were curious about the bear, but also taken by the natural beauty of the scenic views, especially visible from the food stall where the video was shot, flocked to the national park causing officials to worry that the crowds could result in a Covid-19 outbreak.

To try to reduce the risk of Covid-19, park officials have limited the number of tourists allowed into the park, especially at Pha Trom Jai Cliff, the site of the food stall where the viral video took place. The chief of the park said that it made the move to limit visitors to the cliff after seeing a sharp increase in tourists attracted to the site.

The park has now instituted a policy to allow a maximum of 30 private cars, 50 motorcycles, and 30 bicycles per round Monday through Friday. On weekends and public holidays which usually see an influx of visitors, the park’s opening hours were divided into five times slots which park officials can evaluate and decide at any given point how many vehicles would be allowed in during each time slot.

Khao Yai, a few hours northeast of Bangkok and featured in the movie “The Beach” is a forest and grassland park spanning 2,000 square kilometres. It is known for its 50 kilometres of hiking and biking trails and beautiful waterfalls.

The bear made famous in the viral video posted to Facebook could not be reached at this time for comment.

NCC1701A
"To try to reduce the risk of Covid-19, park officials have limited the number of tourists allowed into the park..." good thinking because covid is really dangerous outside. it might jump on you like that bear. stay in your car with…

Nobodysfriend
The food stall seems to be in an elevated position . The bear is hungry . So , put some food for the bear in a lower place that can be watched by the spectators . Good for the hungry…

PatrickSatoLee
"The bear made famous in the viral video posted to Facebook could not be reached at this time for comment." Please bear with it for now.
Malc-Thai
Maybe put food lower down so tourists can eat at the restaurant and watch the bear eat. No danger as the bear will get so fat it won't be able to climb up to the tourists

AdvocatusDiaboli
14 hours ago, Thaiger said: Attendance at Khao Yai National Park has boomed so much thanks to a viral COVID19 Lockdown ending. Other places to follow.

Bangkok, Pattaya, and other destinations still planned to reopen in October