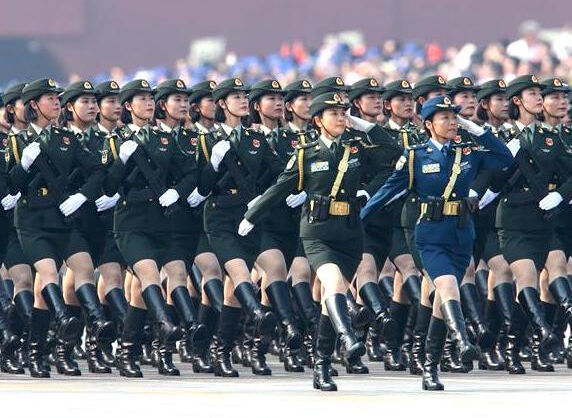 A formation of servicewomen marches in a military parade during the celebrations marking the 70th anniversary of the founding of the People's Republic of China (PRC) in Beijing, capital of China, Oct. 1, 2019. Credit: Xinhua

China has allotted 1.45 trillion yuan for military spending in 2022. That’s the equivalent of US$229.5 billion and a whooping 17 times Taiwan’s defense spending for the year, according to a report by the Taipei Times.

On Saturday, the Chinese Ministry of Finance issued a statement saying the nation’s defense budget would increase 7.1 percent from last year, signaling a faster expansion and widening the gap in defense spending between China and Taiwan.

However, the state-run Global Times reported that China’s military budget “is not a challenge to the US position in the Indo-Pacific region” and that the figure “does not represent a great increase after taking inflation into account.”

Meanwhile, the the administration of President Tsai Ingwen approved a defense budget of NT$374 billion, or US$13.3 billion, for this fiscal year, according to the Taipei Times. The figure was approved after a slight reduction, due in part to a 4% increase in civil servant salaries.

Two special special budgets were approved to acquire new fighter jets, as well as improve air and sea sea capabilities, for a sum of NT$400 billion and NT$480 billion respectively.

As Russia’s invasion of Ukraine hits the two week mark, analysts are wondering whether its ally China might take notes for a future attack on Taiwan. On Saturday, military experts assessing the situation in Ukraine claimed Taiwan could “repel an invasion by China and defeat the Chinese People’s Liberation Army” because the island nation already has established portable missile systems.

“Taiwan is much easier to defend than invade, and the conditions are very different from Ukraine.”

“It has been assessed that China could launch four amphibious marine landing divisions and two army infantry divisions for a total of about 30,000 troops, at least for the first stage of invasion.”

“However, with Taiwan’s domestically developed long-range missiles, together with portable air-defense missile systems, we are certain that we can destroy almost all PLA landing troops.”

Taiwan is set to receive another 400 FGM-148 Javelin missiles equipped with automatic infrared guidance from the US, half of which are to be delivered this year and the other half next year, a ministry official told the Taipei Times. This would allow Taiwanese forces to gradually phase out older Javelin models, upgrading their stock of weapons.

Currently, Ukrainian forcers are using Javelin missiles to defends against Russian military attacks. The portable shoulder-fired, anti-tank missiles have an effective range of 2,500 metres, according to the Taipei Times.

But Chen said the Ministry of National Defense should shift the nation’s defense strategy toward deterrence efforts to prevent war, rather than how to win a war after an attack begins…

“This means dedicating limited military budget to retaliatory capabilities that could inflict intolerable damage on an adversary.”

“[China is to implement] Chinese President Xi Jinping thought as it pertains to the strengthening of the military, and realize the centennial goals for the founding of the armed forces.”

“Military capabilities must be enhanced in every aspect and risks in every sector and region be managed comprehensively, so that the strategic capability to defend national sovereignty, security and interests is improved.”

Shade_Wilder
25 minutes ago, Poolie said: One side is said to be threatened....................by who? A trolling comment without worth or substance; no thanks, Poolie Greetings to your Chinese Commie Party Masters and have a nice day. #Free Taiwan #Free Tibet #Free…
Convert54
Free Willies !

AlexPTY
it does look like 10% increase. stop pointing fingers, deal with your own problem, Thailand