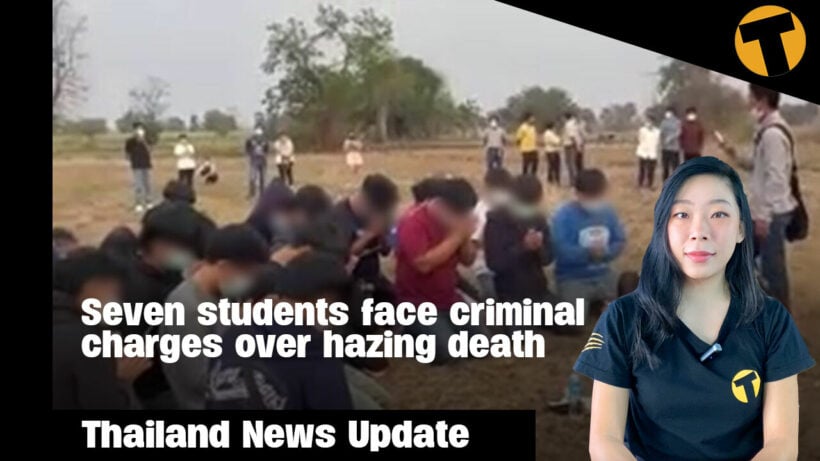 Police will be pressing criminal charges against seven senior students who were allegedly involved in the hazing and death of 19 year old university 1st year student Padyos Chonpakdi. The incident happened in Nakhon Ratchasima. The students have already admitted to police that they organised a brutal hazing ritual, and that their university wasn’t involved. The seven students will now face criminal charges of physical assault leading to death.Padyos, a first-year student at the Rajamangala University of Technology Isan, died during the hazing ceremony in a rice field outside the university campus. Senior students allegedly took Padyos to a rice field where they said they were going to play football, but Padyos was forced to guzzle liquor and was then beaten until he became unconscious.The students tried to revive him, including CPR, but were unsuccessful. He was then rushed to the nearest hospital about 20 kilometres away, but died on the way. Another 60 or so first and second year students also witnessed the brutal hazing. The victim’s father met the six senior students at the hospital. The students prostrated themselves at his feet in a show of deep apology. University administrators say they will offer full compensation for the incident even though it occurred off campus. Hazing and violent initiation ceremonies are a regular occurrence for students who enter the Army, police force, and sometimes university but have been brushed aside by senior Thai politicians in the past…. Deputy PM Prawit Wongsuman spoke after another fatal hazing incident saying that he was subject to similar activities when he was in the army “but it didn’t kill him”.

Almost a year has passed since an elephant trampled a man to death at a hotel resort in the north eastern province of Nakhon Ratchasima. Yesterday, a lawyer, authorised by the man’s wife, has filed a lawsuit amounting to 21 million baht in damages against the resort. 53 year old Raja Thiraphitthayatrakul was trampled to death by an elephant which came loose while he was feeding it in front of the Jungle House Khaoyai resort in Nakhon Ratchasima in April last year. His wife, Sumalee Thiraphitthayatrakul, said the hotel hasn’t offered her a single baht since her husband’s tragic death almost a year ago. Sumalee said she has faced a year of hardship since she is a housewife with two children who are still studying.Shortly after the incident the hotel presented a wreath to her family but hasn’t provided any financial support. Sumalee said she wants the lawsuit to set an example to prevent this kind of incident from happening again. The elephant’s trainer, or mahout, said that the female elephant named Cherry had never been violent before and regularly gave people rides. The trainer had tied up Cherry near the road while mowing a nearby lawn. When they returned, Raja had been trampled to death. The mahout says he’s has also faced hardship and unemployment since the incident as the hotel said the elephant and mahout were not welcome to work there anymore.

The bus driver involved in the fatal incident in Saraburi, killing eight passengers after he crashed into a bridge pillar, has had his licence revoked by the Department of Land Transport. The department is also considering penalties for the state-run Transport Company, which was operating the Bangkok to Suwannaphum bus, carrying more than 30 passengers. The driver, who was later found to have methamphetamine in his system, says he nodded off when the double-decker bus hit a supporting pillar for an overhead bridge, ripping off the right side of the bus. Eight passengers died and more than 20 were injured. The 30 year old driver, Narinsart Hongsa, has confessed to police that he used the drug while driving. The driver was charged with reckless driving causing death and injury and using Category 1 narcotic while servicing. The Transport Company will also face punishment for recklessness.

As a special instructor, Thailand’s internationally known Muay Thai boxer, Buakaw Banchamek, has been coaching Muay Thai to Thai and US soldiers participating in the joint exercise called Hanuman Guardian 2022, taking place in Thailand’s central province of Lop Buri.Buakaw, who is currently an army officer, taught theoretical and practical techniques yesterday in the 31st Infantry Regiment’s camp…. things like warm up before a fight, how to punch, do knee strikes, execute kicks and how to show respect to the instructors. The 39 year old has earned plenty of title belts and is a household name in Thailand. He is also a member of Thailand’s National Kick Boxing Association’s board of directors. Thai and US army co-host Hanuman Guardian, an annual bilateral military exercise. It’s been running from February 11 to March 24 this year.

A case of the cultural switcharoo in Isaan over the weekend. A Thai bride presented a dowry worth a staggering 12.8 million baht to her groom at the Khon Kaen Convention Centre on Sunday. Instead of paying a dowry himself, the 33 year old groom Micky received 2 million in cash, 500,000 baht’s worth of jewellery, a 5 rai land title deed valued at over 500,000 baht, a 7 million baht house, and a 2.8 million BMW Series 3 car from his 33 year old bride, Bailew. Of course, it is usually the bride’s family who request a dowry or “sin sod” of somewhere between 100,000 baht to a million baht from the groom. But Bailew has many business ventures including a successful restaurant in Khon Kaen. When she told her family of her idea to pay the dowry, they did not object. Bailew says that she is a very lucky woman because Micky has taken care of everything throughout their relationship, adding that “All I ask for is that we love each other.”Micky says he was delighted to be in love and added that, when he found out Bailew wished to pay the dowry, he knew the wedding would be a very auspicious occasion indeed.

And, there’s someone looking for a missing package this morning. A package containing more than 25 kilograms of ketamine has washed up on a beach in Trat province on Thailand’s east coast yesterday. A 65 year old woman was out collecting rubbish on the beach when she found what appeared to be 25 bags of Chinese tea tied together and washed up on the shore. After closer inspection, the bags were filled with white powder. At first, the police suspected the drug was crystal methamphetamine, which has washed up in large amounts on beaches in Trat before. But when it was tested, it turned out to be ketamine. Ketamine is an anaesthetic drug used as a sedative in both veterinary and healthcare settings. It is listed as an essential medicine by the World Health Organisation. But, the drug has also made its way into the party scene for its dissociative effects. The drugs have been confiscated and police are investigating the source of the package, which is currently unknown. Anyone going to turn up to pick the package up?

DoUKnowWhoIAm
I hope they won't be able to buy themselves out of this, although I wouldn't hold my breath.

Thaidup
Finally after reading this story I think I know what "Hazing" is. Tell me If I'm wrong It's what us old people used to call "Initiation" that has been going on for decades. Condolences to the family.

Villas in Phuket offering fabulous views of the island