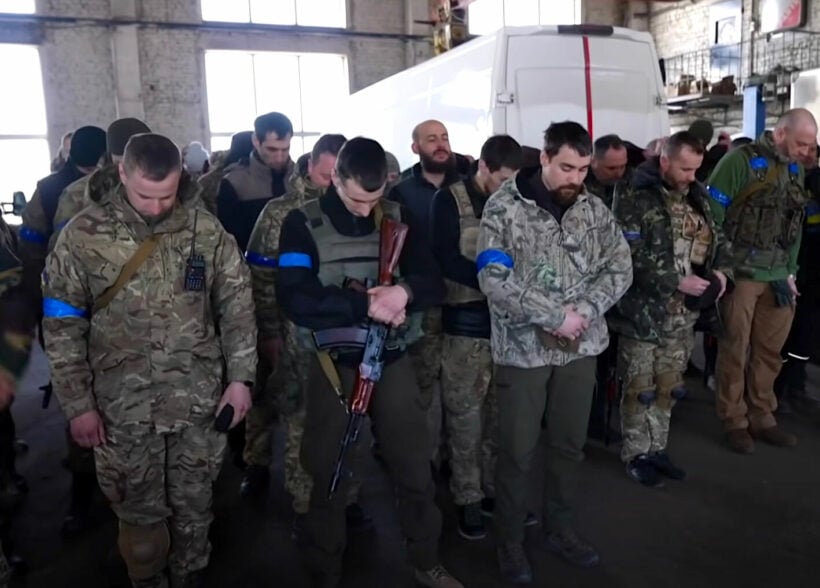 Ukrainian nationalists who have enlisted in the military bow their heads in prayer before training to defend the capital of Kyiv. Credit: France 24 | YouTube

As Russia’s invasion continues, here’s the latest headlines from the war in Ukraine…

• In a televised address, President Volodymyr Zelensky says Ukraine could not submit to ultimatums from Russia. The only way to do that would be to “destroy us all” he said. The remarks come after Ukraine rejected a Russian ultimatum for Mariupol authorities to surrender the city by 5am Moscow time on Monday in order to open humanitarian corridors to allow desperately needed aid into the besieged city…

“[Russia says:] ‘You abide by the different point and we will stop the war.’ No, that’s not the way of going about it. It doesn’t depend on me. The whole issue is that the power and the people are united. We cannot implement an ultimatum. Ukraine cannot do it because we have lost our people. How can this be possible? This is not feasible. You have to destroy us all. Only then will the ultimatum be implemented.”

“[Russia says:] ‘Give us our cities back — Kyiv, Mariupol, Kharkiev.’ Neither the local, the residents of the cities or the president could do this. You can see in these cities that are occupied, when the Russian forces soldiers penetrated them, the people would not surrender. They would just raise their flag. So what do you want to do. You just want to destroy us all. The only thing I can say is that the ultimatum can be implemented only when there is nobody left.”

• Meanwhile, Russian troops are continuing their assault on civilians, with Russian shelling killing at least eight more people in a residential area and shopping centre in Kyiv. The mayor of Kyiv has announced a new curfew in the city from Monday evening until 7am local time on Wednesday.

• US President Joe Biden claims Russian President Vladimir Putin’s “back is against the wall” in Ukraine. This is increasing his chances of using chemical or biological weapons, he says. Speaking at a business roundtable event in Washington DC on Monday, Biden says he believes Russia is preparing new “false flags.” US and allied officials have claimed Russia may use false claims of chemical weapons in Ukraine as a pretext to use such weapons themselves…

“They are also suggesting that Ukraine has biological and chemical weapons in Ukraine. That’s a clear sign he’s considering using both of those.”

• Meanwhile, Ukrainian military intelligence reports that Russian troops are having trouble resupplying and repairing broken weaponry. The Institute for the Study of War said that Russia has been forced to deploy “low quality” reserves, including replacing losses in frontline combat units with “low readiness units” from Russia’s Far East. Notably, Russia has raised the conscript age limit from 55 to 65 and is said to be aggressively recruiting 18 year olds, according to Ukrainian intelligence shared by the ISW in their daily report of the conflict in Ukraine.

• Ukraine’s General Staff claims that “irreversible” losses have forced Moscow to cancel planned discharges of officers and enlisted troops from the military. They also say that about 300 Russian soldiers were killed in combat on Monday alone.

• Meanwhile, a Ukrainian negotiator says the resilience of Ukrainian forces is causing Russia to “more adequately assess the situation” of the war. The change has helped encourage a dialogue between the two sides, according to Mykhaylo Podolyak, an aide to President Zelensky. He says the Russian and Ukrainian leaders themselves must decide on a peace agreement.

• In southern Ukraine, Russian troops have seized a crucial land corridor with the Crimean peninsula, effectively cutting off Ukraine from accessing the Sea of Azov, according to the General Staff of Ukraine’s Armed Forces.

• President Zelensky says Ukrainian forces have so far managed to keep Russia at bay. In a video message on Monday, he says that although Russian forces have been trying to slowly advance, Ukrainian’s military has been able to repulse their efforts and restrain their forces.

• He also claimed that another Russian aircraft had been brought down by Ukrainian forces in the Kharkiv region. Speaking of Russian warplane pilots, he said… 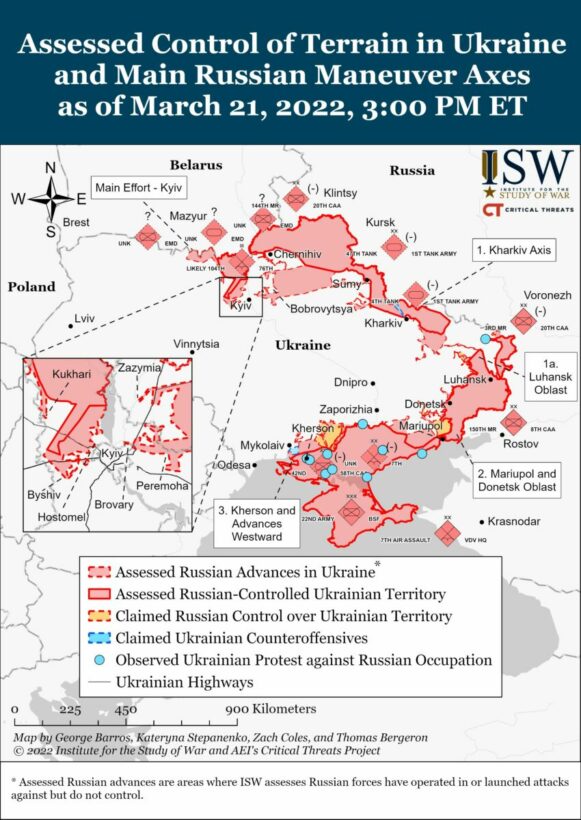 IMAGE CREDIT: Institute for the Study of War

Politenessman
13 hours ago, Guest1 said: Ever heart about ABM-treaty? There you find the reason why Russia had/has them ONLY around Moscow and why the US only had them, for some month or such, around Grand Forks, North Dakota. Or I…
Politenessman
16 hours ago, Tim_Melb said: Come off it NATO and the US have been antagonising Putin and Russia for 30 years, constantly encouraging the old iron curtain countries to break the agreements signed when the wall came down and getting…
vlad
Oh dear The Russian Troop ship " Orsk " Attacked by Ukranian troops and set ablaze in port. https://www.dailymail.co.uk/news/article-10646879/Ukraine-war-Huge-Russian-ship-destroyed-Kyivs-navy.html
Vigo
On 3/22/2022 at 10:03 PM, Rookiescot said: Renault kept paying its employees because its the right thing to do. Renault can pull out of Russia tomorrow because France and the EU will pick up the bill. Renault was obliged by…
Rookiescot
20 hours ago, Vigo said: Renault was obliged by local law to keep paying the workers, not because it was "right thing to do". Where do you think France and EU (BTW, France is part of EU) will get money…