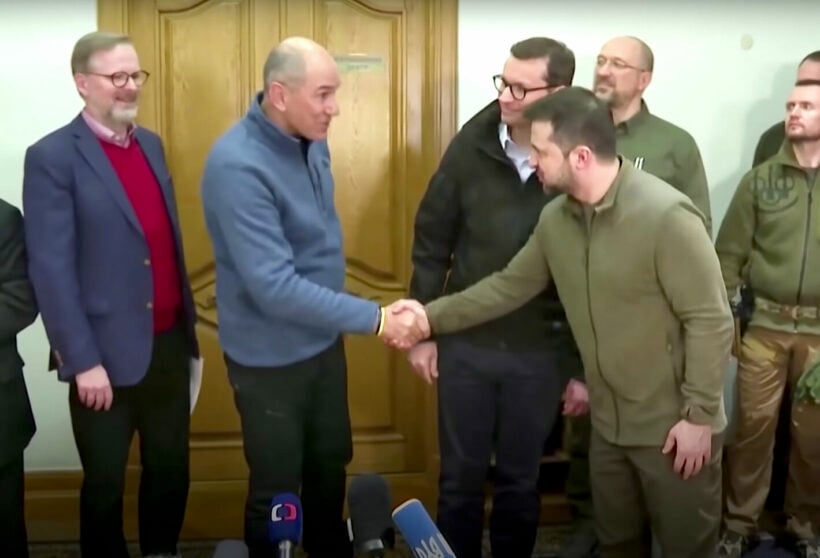 The prime ministers of Poland, Slovenia and the Czech Republic meet Ukrainian President Volodymyr Zelenskiy in Kyiv on Tuesday. Credit: the Guardian | YouTube

As Russia’s invasion marks three weeks, here’s the latest headlines from the war in Ukraine…

• After the meeting, Morawiecki, the leader of Poland’s ruling party, said an international peacekeeping mission should be sent to Ukraine and be equipped with means of self defence.

• Zelensky says peace talks with Russia are beginning to “sound more realistic.” He reportedly is willing to drop his pursuit of joining NATO if he can get security guarantees. Ukrainian negotiator Mykhailo Podolyak has said that although there are “fundamental contradictions” during the talks, there is “certainly room for compromise.”

• Talks between Russian and Ukrainian negotiators will resume on Wednesday, according to Ukraine’s negotiation.”

• In the besieged city of Mariupol, the deputy mayor says Russian troops are holding 400 people, including doctors and patients, “like hostages” inside a hospital.

• About 20,000 people were able to leave the city on Tuesday, according to a senior Ukrainian official, including some 2,000 cars.

• Meanwhile, Kyiv Mayor Vitali Klitschko has announced a 35-hour curfew in the capital city. He warns of “a difficult and dangerous moment” as Russian forces continue their assault. Fatalities were reported in the city after Russian shelling hit buildings in residential areas across Kyiv on Tuesday, Ukrainian authorities say.

• The US Senate has unanimously passed a resolution condemning Russian President Vladimir Putin as a war criminal, in a rare show of unity. According to the statement… “The resolution… backed by senators of both parties, encouraged the International Criminal Court (ICC) in The Hague and other nations to target the Russian military in any investigation of war crimes committed during Russia’s invasion of Ukraine.” Democratic Senate Majority Leader Chuck Schumer said that Democrats and Republicans had joined together to say…

“Vladimir Putin cannot escape accountability for the atrocities committed against the Ukrainian people.”

• On Wednesday, US President Joe Biden signed a bill providing $13.6 billion in aid to Ukraine and its European allies. Both houses of U.S. Congress approved the legislation. The US has also issued new sanctions on several Russian defence officials.

• In response, the Kremlin has barred 13 Americans from entering Russia, including President Joe Biden.

• The UK has also announced 350 new sanctions listing on Russia, and 9 new listings under its cyber sanctions regime, including a travel ban on some high-ranking officials.

• The Russian State Media reporter who protested during a prime time TV broadcast has been released after a 14 hour interrogation, after which she said she was denied sleep and access to a lawyer.

• A judge with Moscow’s Ostankinsky district court on Tuesday charged Marina Ovsyannikova with a misdemeanor and ordered her to pay a fine of 30,000 rubles ($280), after she ran onto the set of Russia’s most-watched evening news broadcast for Channel One and held up a poster reading…

“No war, Stop the war, Don’t believe the propaganda, They are lying to you here, Russians against war.”

• More than 40,000 Syrian soldiers are on standby after being recruited by Russia. Meanwhile, Russian and Turkish foreign ministers will discuss Ukraine on Wednesday.

• Power has been restored to decommissioned nuclear power plant of Chernobyl, after Russian forces damaged a high-voltage power line, which left the town — home to some 20,000 people — without electricity for five days. The Ukrainian national energy company Ukrenergo restored power to the area for the third time on Monday night.

• The decommissioned power plant is located about 60 miles north of Kyiv and houses 20 tonnes of nuclear waste, which must be constantly cooled to prevent radiation from leaking through vaporisation.

• Meanwhile, the town’s mayor has called for humanitarian corridors to bring in aid and switch out overworked staff, which have been forced to work round the clock at gunpoint…

“All safety systems are supported on generators, which are also running out of fuel… If the cooling systems stop, even for a while, we will get yet another Fukushima.”

• So far more than 3 million people have fled Ukraine since Russia began its invasion on February 24, according to the UNHCR. Nearly half of them are children. Speaking with Thai PBS, a UNICEF spokesman said Ukrainian refugee children are are vulnerable to violence and exploitation and are in desperate need of protective services…

“Ukrainian children arriving in those border countries are at significant risk of family separation, of violence, of sexual exploitation and trafficking.”