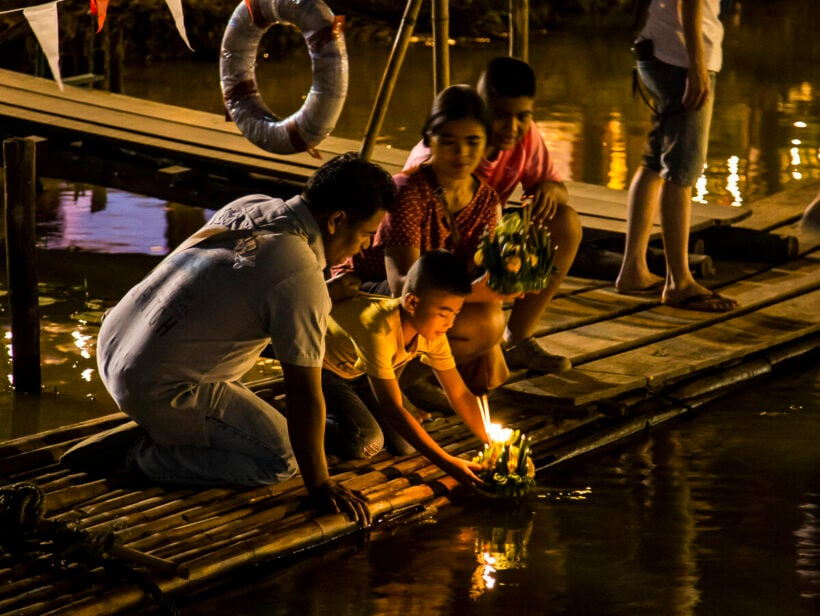 Thailand celebrates a number of festivals throughout the year, including the beautiful Loy Krathong festival. Known as Thailand’s Festival of Lights, Loy Krathong is one of the biggest celebrations on the Thai calendar. This picturesque festival is a time for people to gather around rivers, canals, ponds, lakes, and other bodies of water to release lotus-shaped rafts onto the water. Today, the festival also features spectacular performances, beauty pageants, and fireworks. If you want to join the celebrations, here’s everything you need to know about Loy Krathong.

What is Loy Krathong?

Loy Kratong, which translates to “floating banana tree trunk,” is a festival where people gather along Thailand’s riverbanks to float banana trunks. The banana trunks (Krathong) are typically shaped like a lotus and decorated with flowers, incense, candles, personal items, and craft-store buys.

The history and reason behind this beautiful festival are complex. It’s believed that Loy Krathong originated in Sukhothai, an ancient city situated around five hours from Bangkok. The festival is not necessarily a religious holiday. For some people, however, it’s a day to pray and give gratitude to the water goddess, Phra Mae Khongkha, as well as to ask for forgiveness for using too much water or for polluting the water as they float their banana trunks into the rivers.

Many people also believe that floating Krathong is a symbolic way to brush off bad luck, let go of anger or grudges, and cleanse misdoings and misfortunes from the past to start anew and free of negative feelings. If your candle stays lit until you can’t see your Krathong, it means that you’ll have a year of good luck. If not, well, better luck next time.

Thai people traditionally release their Krathong into the rivers and small canals. However, today, people also release the Krathong into a lake or pond. With thousands of lightened banana trunk boats floating down waterways in Thailand, Loy Krathong is definitely one of the most enchanting festivals in the country.

Besides releasing Krathong, the festival is also full of many fun performances. You can see and hear fireworks, stroll around streets filled with a lineup of vendors, parades, and even beauty pageants known as “Noppharat Queen Contests.” It’s common to see Thais wearing traditional Thai clothing during the festival. 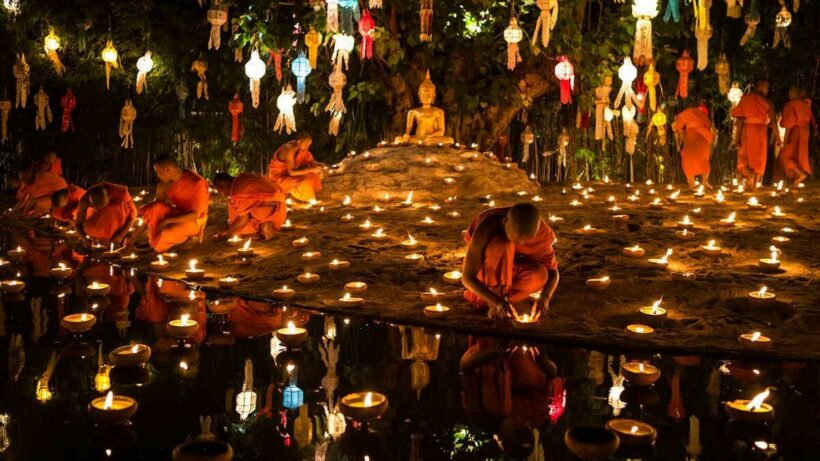 When is Loy Krathong?

Loy Krathong is celebrated on the 12th full moon of the Thai lunar calendar. Therefore, the date can change every year depending on the full moon. It usually falls at the end of the rainy season or in the month of November. This year, Loy Krathong will take place on the evening of Friday, November 19. The festival usually starts in the evening.

Although the mass release of Krathong occurs on Loy Krathong day, the celebrations can continue for several more days. The festival can go on for 5 days in Sukhothai and 3 days in Bangkok and Chiang Mai.

Where to go during Loy Krathong?

Loy Krathong is celebrated throughout Thailand, so you can go to any body of water in the country to enjoy the festival. Thais eager to float their Krathong and pay their respects to the goddess of water will gather around almost every river, canal, pond, lake, and other body of water. However, if you want to enjoy an extra magical experience, the following cities have the liveliest Loy Krathong festivals:

Chiang Mai is the best place to go for a truly mesmerising Loy Krathong Festival experience. Aside from Loy Krathong, the city also holds the Yi Peng Festival on the same day. The Yi Peng Festival, also known as Thailand Sky Lantern Festival, is unique to Northern Thailand. Therefore, you won’t experience the fusion of Loy Krathong and Yi Peng festivals in any other place around the country. In addition to releasing candlelit banana trunks on the water, people also light and float lanterns into the night sky. As a result, you can experience an enchanting scene that looks like something out of a fairytale.

There’s typically an elaborate annual parade during Loy Krathong in Chiang Mai. However, this was cancelled in 2020 due to the Covid-19 pandemic.

One of the best places to celebrate Loy Krathong and Yi Peng in Chiang Mai is at the banks of the Ping River. If you want to get the best view, you can watch the celebrations from the Iron Bridge and the Nawarat Bridge. The Phase Gate is also a great place to observe the festivals since the opening ceremony, the start of the parade, and the beauty contest are all held there. You can also visit the Three Kings Monument if you want to see the Lanna Traditional Dance performance and the opening ceremony of the Lightning Candle Tray. If you want to observe the festival from a temple, you can visit Wat Phan Thao. 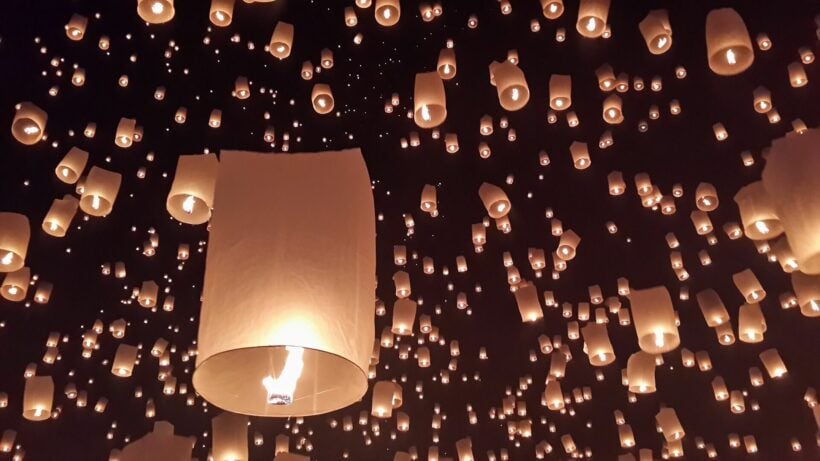 As the birthplace of Loy Krathong, Sukhothai is an incredible place to experience the festival. This ancient city is where you’ll get the most authentic Loy Krathong experience, making it the perfect place to visit if you want to learn more about the legends and history of the joyful festival. Most festival events are held in the Sukhotai Historical Park. Therefore, you’ll get to take in the beautiful floating Krathong while surrounded by magnificent ancient monuments.

People in Sukhothai celebrate Loy Krathong for 5 days. Besides the mass release of Krathong, the festival usually features parades, light and sound shows, folk music performances, and a beauty contest. Bangkok is another great place to experience Loy Krathong. The city is usually full with festival venues and activities. Even hotels across the city host a Loy Krathong event at their swimming pool area. The festivities in Bangkok are usually held along the Chao Phraya River. The top venues to visit to enjoy Loy Krathong around the riverside area include Asiatique, Phra Athit Pier, Wat Saket, and Maharaj Lifestyle Mall.

Asiatique, the riverfront night market, is especially popular. It’s a great place to visit if you want to experience the festival like a local. Here, you’ll find some of the most incredible shows and one of the biggest crowds across Bangkok. The main event usually includes the retelling of the Loy Krathong history through dance and music and an illuminated Krathong release procession.

Besides Asiatique and venues along the Chao Phraya River, many ponds and waterways across the city also become a focal point for people to gather and launch their Krathong. Some of the most popular parks to experience Loy Krathong are Benjasiri Park, Benjakitti Park, and Lumpini Park. You can also visit the city’s temples, such as Wat Pho and Wat Arun, to enjoy the festival. Loy Krathong in Phuket is much more laid back when compared to Chiang Mai, Bangkok, and Sukhothai. It is the perfect place to go if you want to experience the festival, but not the crowds.

You can usually join the celebrations on all waterways and beaches across the island. Some of the popular beaches for the festivals are Nai Harn Beach and Patong Beach. For a more local experience, Kata Beach, Karon Beach, Suan Luang Park, and Saphan Hin Park are great places to visit. 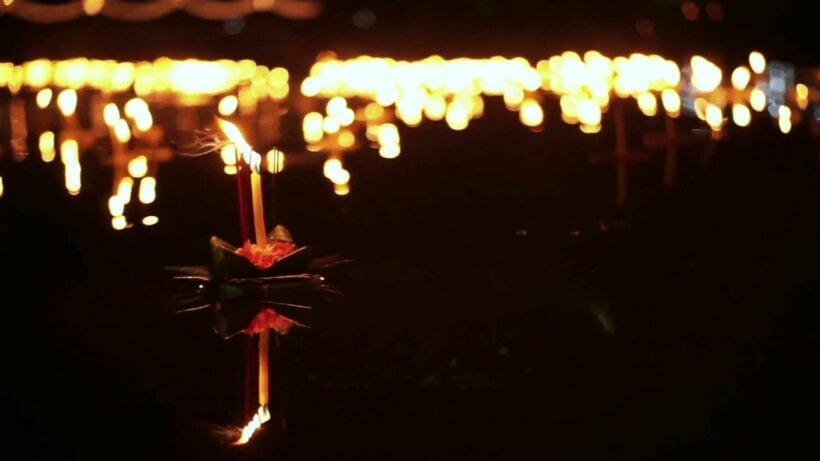 Although Thai people largely celebrate Loy Krathong to worship the goddess of water, it’s also regarded as a version of Valentine’s Day in Thailand. Since the olden days, the festival has been the time for singles to socialise and meet new people for the first time. Some believe that they will meet their soulmates during the festival.

2. You can decorate your Krathong however you want

Krathong is made from a banana tree trunk shaped into a lotus by using folded banana leaves and decorated with flowers. People use banana tree trunk and leaves because the tropical plant is biodegradable. They’ll turn into fish food within a few days. In addition, the trunk can float well on water because it’s airy and light.

Traditionally, people place a lit candle and 3 sticks of incense in the centre of Krathong. Flowers, candles, and incense sticks are all Buddhist symbols. The flowers represent the worship of the Buddha, the candle symbolises wisdom and knowledge, and the incense represents purity and power.
Besides the 3 essential items, how you decorate your Krathong is up to you. Most people add personal items and craft-store buys into their Krathong. Coins might also be added as an offering as a way of making merit, welcome wealth, or honour ancestors. 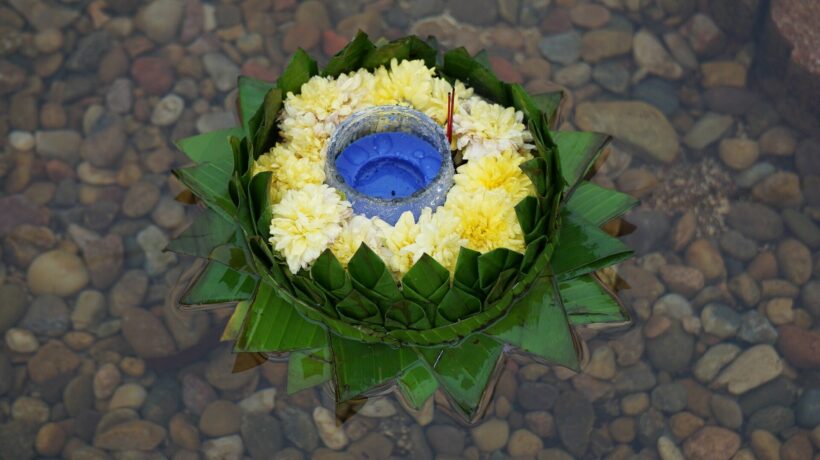 3. Putting hair, fingernails, and bits of clothes in Krathongs

Besides decorating their Krathongs beautifully, some people also put hair strands, nail clippings, and even bits of clothes into their Krathongs. Putting these interesting things inside their Krathongs is a way to get rid of negative energy from the past, as well as to brush away bad luck and misfortune.

Aside from Thailand, other countries that have significant southeastern Tai cultures also celebrate Loy Krathong. These include Laos, Myanmar, Cambodia, and some parts of Malaysia like Kelantan and Kedah. 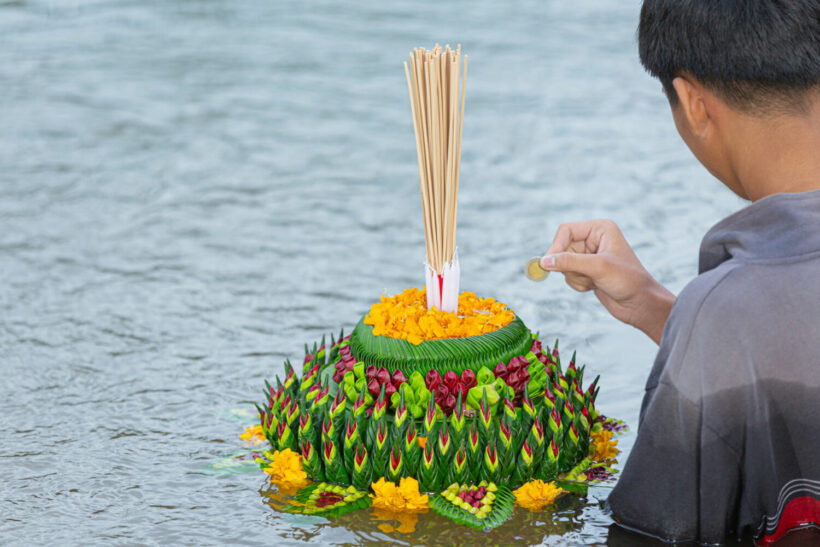 PHOTO: People may add coins to their Krathong. jcomp/freepik.

Now that you know all the essentials to enjoy Loy Krathong, get ready to experience one of the most magical festivals in the world!

If you want to learn more about Thai festivals, read our article on Interesting Festivals to Experience in Thailand and Everything You Need to Know About Songkran.

Bob20
Thanks for the explanation. What would be handy to know as well is that the sky lanterns were banned in CM last year already. Even the year before Covid there were only few from restricted launch areas. And can you…

City Guide: How to get around Bangkok 2022