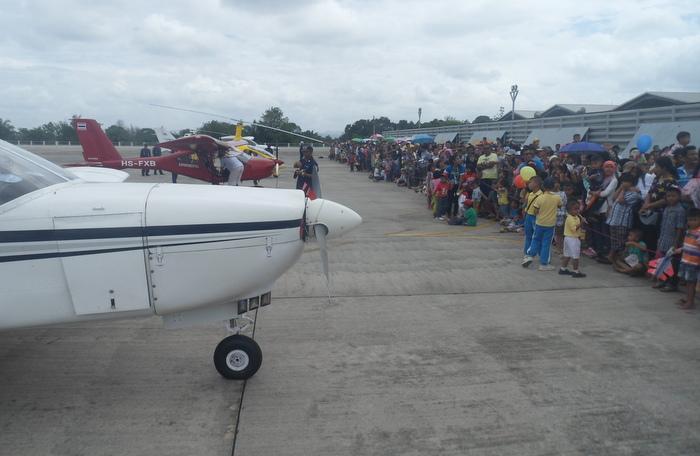 PHUKET: For the second consecutive year, a large contingent of recreational aviation enthusiasts from Phuket flew southeast to Songkhla Province to take part in what may have been the largest and most exciting air show in Thailand’s history.

The show was staged for Thailand’s National Children’s Day, an annual event which is celebrated on the first Saturday after New Year.

One of the most highly anticipated entries at this year’s show was an aerobatics display by none other than Les Vorosmarthy, the Malaysia-based, American stunt pilot whose exploits aboard his German-built Extra 300 have been featured at several past events at Phuket Airpark and over the island’s Surin and Patong beaches.

One of his maneuvers over Hat Yai was the so-called ‘tail slide’, when Les cuts the engine to idle while the plane is still rising skyward. As gravity takes its toll, the craft comes to a stop in mid-air before slipping backwards into free fall. When the plummeting reaches a certain speed, the wind hits the tail and flips the plane right over.

There were also demonstrations of firefighting and air rescue operations – and lots of free snacks and gifts for the kids.

“Last year’s event was just unbelievable. There had to be 20,000 to 30,000 people who turned out throughout the day… It was the first time such an event had been held there in over a decade, since the start of the unrest in the Deep South along the Malay border,” Mr James said.

“It’s incredible the amount of time and planning that goes into these events, including dealing with the security concerns. Our private aviators from Phuket were really treated like VIPs from the moment we stepped down from our planes,” he said.

He made a point of thanking Wing 56 Commander Aumarit Kanokkaew and his deputy, Group Capt Annop Nongchana, for involving private pilots and their aircraft in these shows.

“The goal is to enlighten, entertain and educate,” Mr James said.

On Deck: When only a fraction is enough