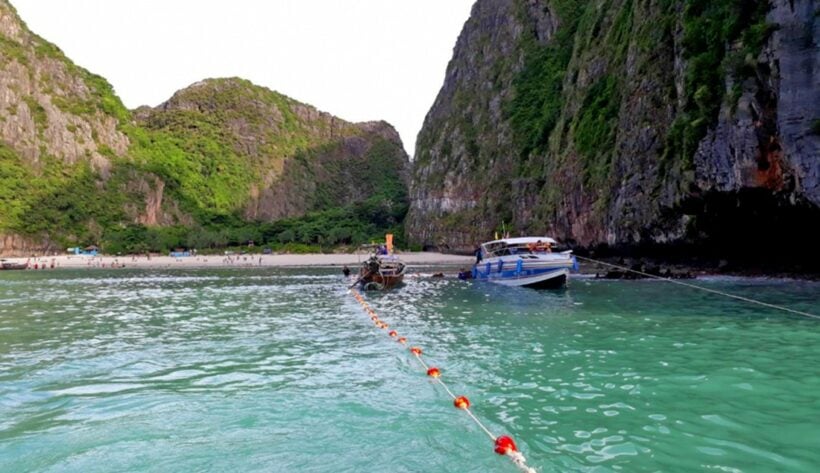 The decision to close Maya to pave the way for a rest period, and preparation for new access to the area, was made by the National Parks, Wildlife, and Plant Conservation Department in March. The department had consulted with the marine national parks advisory committee comprising a group of noted marine experts including Assistant Professor Thon Thamrongnawasawat, who is also a member of the national reform and strategy committees.

The bay was made famous by the 2000 Hollywood film “The Beach” starring Leonardo DiCaprio, but it has been degraded by the excessive number of tourists – a daily average of about 4,000 people and 200 boats.

Following a recommendation by the experts, the department decided to make the bay off-limits from yesterday until September 30. The closure is seen as an entry point for a new approach to tourism management at the park, and would also set a new standard for another 26 Thai marine parks that also bear a similar burden, according to the department.

Since Thursday, the rangers have placed buoys extending hundreds of metres in front of the bay to close it off from tourist boat access, according to Songtham Suksawang, director of the department’s National Parks Office overseeing the operation.

“Maya today is very peaceful,” said Sontham, apparently with no tourist boats coming and going as they did up until Thursday. 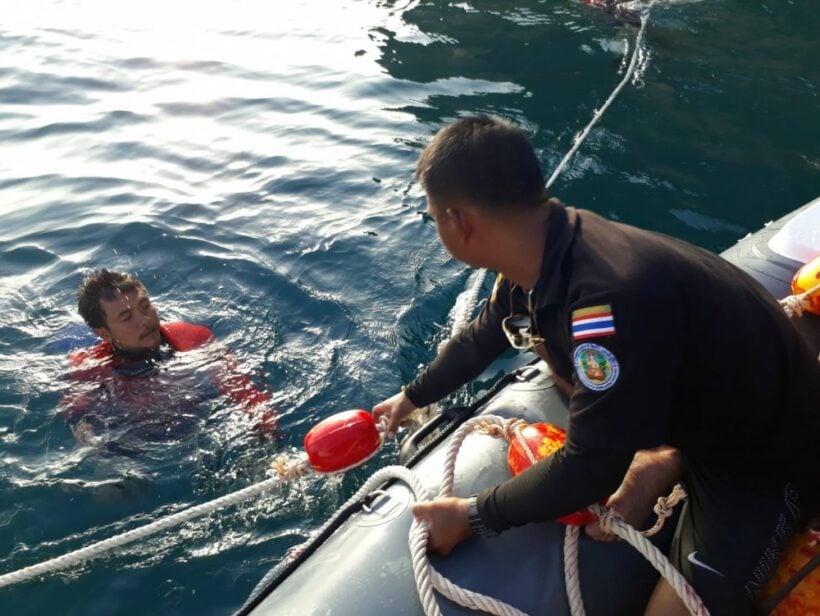 According to the department’s plan, the old access to Maya Bay will become permanently unattainable. It will be shifted instead to the back of the island, where a new aluminium and plastic pier and bridge will provide new access to the bay to reduce ecological impacts caused by tourists.

The number of both individual tourists and transport boats will also be cut in half, while an e-ticketing system will be introduced to help handle tourist demand. Second-tier tourist spots will also be cultivated to help handle tourist pressure.Perhaps most importantly, the degraded ecosystems of the island will be rehabilitated, including the coral reefs in front of the bay.

Dr. Thon posted a message to his Facebook page, noting that Maya has been exploited for tens of years, with boats taking tourists in and out, crashing into and crushing coral reefs thousands of times. This caused the destruction of marine resources as tourists visiting paradise slowly pulverised the reef coral, smashing it over and over. The closure and rehabilitation today, he said, would draw tears of joy from many sea lovers as an end is called to the reef’s destruction.

“The sounds of the sea, the waves, the wind and the birds on this island paradise are like they were saying, ‘thank you all for giving the paradise a chance’,” wrote Thon. 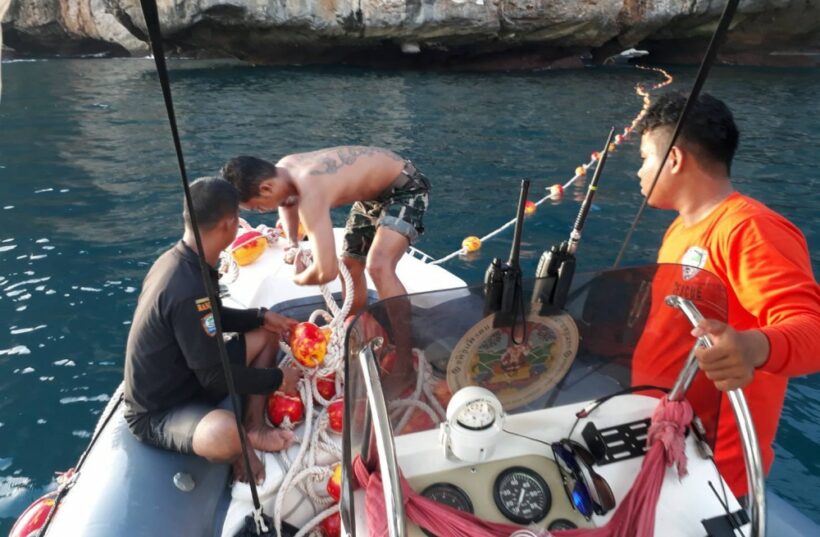 Keep in contact with The Thaiger by following our Facebook page.
News Categories:NewsPhuketTravel
Related Topics:
Up Next 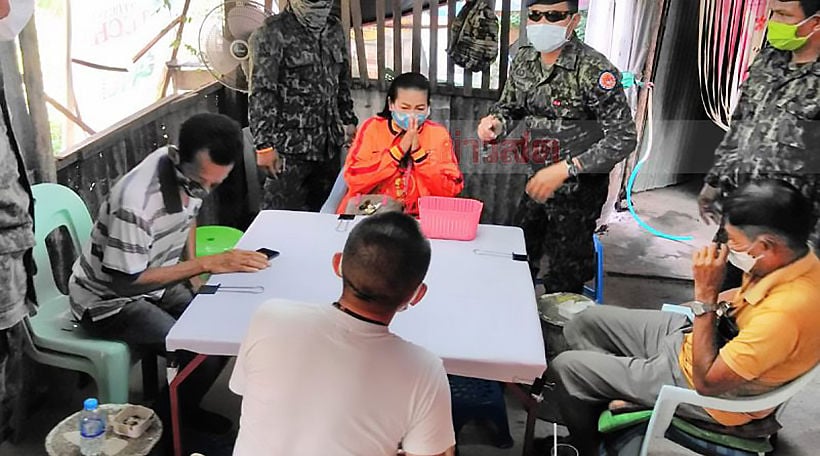 Thailand’s recently declared state of emergency has meant the temporary closure of many businesses, leaving a lot of people with a lot of time on their hands. One woman in the northeastern Nakhon Ratchasima province grew bored and decided to invite some friends around for a bit of light home gambling playing cards. But her husband was afraid she might end up infected with the Covid-19 coronavirus, so he called the police (gambling is illegal in Thailand, officially.)

Police arrested 4 suspects, 3 men and and the wife playing the card game “rummy.” The suspects have been sent to the Nakhon Ratchasima Court for prosecution. The province’s deputy governor says officials received a complaint from a male citizen, later revealed to be the husband of the female suspect. The province has ordered 22 businesses to temporarily shut down in order to minimise the spread of Covid-19. This caused the husband and wife to have perhaps a bit too much free time.

It was not the wife’s first infraction. She had been regularly spending her free time gambling in a village located behind the province’s Saint Mary’s Hospital. The husband, fearing the worst, decided strict action was required. He called police and gave the exact location of where the card games were taking place. The suspects were arrested with cards and 4,000baht in cash was confiscated. Thankfully, none of the suspects had a fever or showed virus symptoms.

We fear another headline in coming days… something along the lines of “wife beating up husband in north eastern Thailand”. 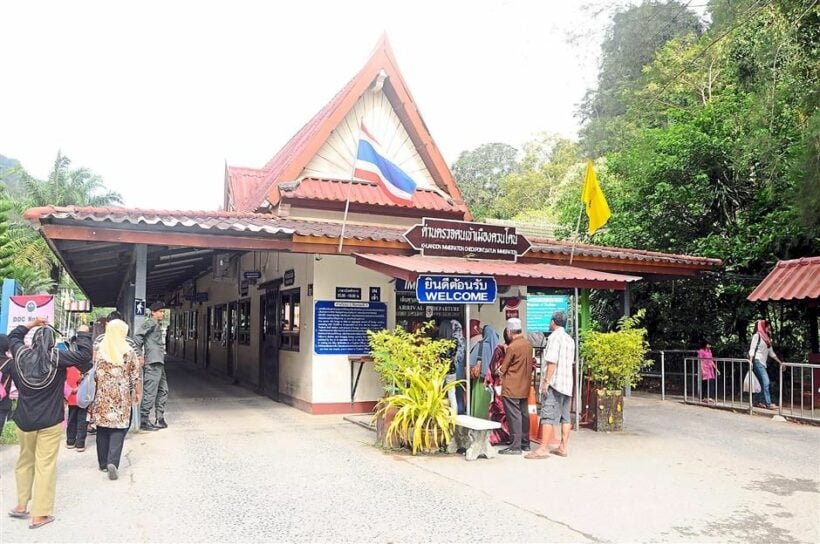 Around 300 Thais trying to return to Thailand are stranded at the Wang Kelian immigration checkpoint in northern Malaysia’s Perlis State. On the other side is Thailand’s Wang Prachan checkpoint in Satun’s Khuan Don district. They’ve been denied entry after failing to comply with the strict new regulations set by the Thai authorities.

Thailand and Malaysia have closed their checkpoints along the southern border. The two countries do not allow entry by foreigners via these checkpoints except their own citizens.

Thai nationals are meant to be permitted to return to Thailand via the Wang Prachan immigration checkpoint in Satun. But to be eligible, the Thai nationals are required to contact the Thai embassy in KL or a Thai consulate in Malaysia to get a formal letter of their residential status in Thailand. The Thais are also required to obtain a health certificate which are issued not longer than 72 hours previously.

250-300 Thais, most of them who worked as crew on Malaysian fishing boats, but live in Satun, as well as some Thai tourists, converged on the Wang Kelian checkpoint from around 9am yesterday. But they were denied entry by the Thai immigration police because they failed to produce all the requisite paperwork.

By 2pm a meeting was held between Thai and Malaysian authorities on the Thai side of the border. All the talking wasn’t able to resolve the situation and the Thais were told they could not cross into Thailand.

Eventually, after hours of negotiations, the Satun Governor Veeranan informed the throng that the Thai consulate in Penang, would speed up procedures so that the stranded Thais would be able to return home.

Authorities are cracking down and enforcing the ban on on public gatherings under the the state of emergency declared to fight the Covid-19 coronavirus epidemic last week. 22 people were arrested at a drug party in Chiang Rai yesterday for “gathering in defiance of the Emergency Decree”. 10 men and 12 women between the ages of 20 and 30 were nabbed at a hotel in the province’s main city district.

(Gamblers also arrested in Phuket, below)

The 22 were attending a pool party where alcohol and drugs such as ecstasy and ketamine were allegedly being sold. Police confiscated 237,000 baht in cash found in a bag, along with illicit drugs for evidence.

An initial investigation showed that a 24 year old man from Trat province in Thailand’s east, on the Cambodian border, had been holding parties at the hotel since last Thursday. It’s believed he started holding the parties because most public venues are unavailable during the virus scare.

Apart from drug charges, the detainees will also be punished for defying the Emergency Decree, which bans gatherings. The penalty is two years in prison and/or a fine of up to 40,000 baht. Chiang Rai has 5 confirmed coronavirus cases.

In a related development, 6 gamblers were arrested in Phuket near the island’s Muang district yesterday.

The detainees were identified as 51 year old Natthawut, 55 year old Suwit, 40 year old Charoon, 48 year old Praiwan, 28 year old Natthapol and 39 year old Natthapong. No surnames were added to the report. Police say that while some were wearing masks to potentially protect themselves from the coronavirus, they were violating the Emergency Decree by sitting around a table to play the games. Gambling is officially illegal in Thailand, apart from the bi-monthly lottery.