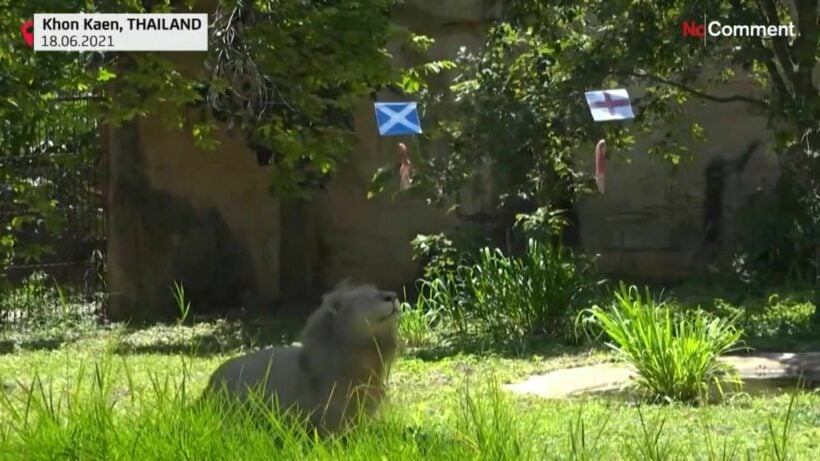 Step aside Aslan, there’s a new mythical lion in town. A Thai zoo up in the northern province of Khon Kaen is claiming they have a lion that can predict the Euro 2020 football matches.

The lion,  a 5 year old white lion named “Boy”, has supposedly correctly predicted 4 Euro 2020 matches. The lion lives and does his sports related future telling from the Khon Kaen Zoo.

The lion/seer predicts the future winner by grabbing meat that is labelled with a national flag by a wire held above the pen.

The feline prophet has successfully called the matches of world champions and tournament favourites. It is not known if the Lion has put his soothsaying abilities toward predicting other matters, such as the July 1 Sandbox.

However, the lion’s abilities are not infallible. He incorrectly called Spain’s draw with Sweden.

“He previously predicted other football matches but the predictions were not accurate”.

Last Friday, Boy tantalised sports and gambling fans when he ostensibly called a draw between England and Scotland. Boy had lunged at the meat and both English and Scottish meat fell.

However, after zoo staff scrutinised video foot, they determined Boy has clearly indicated the Scottish meat. This would imply that Boy had prophesied a win for the Tartan Army.

It would seem Boy’s initial prediction was correct as yesterday England and Scotland came to a draw.

RGA
Not sure about Thai lions, but most other lions aren’t canines. Try feline.
Malc-Thai
I'm pretty sure this is where they get the predictions of number of tourists that will go to phukets sandbox scheme