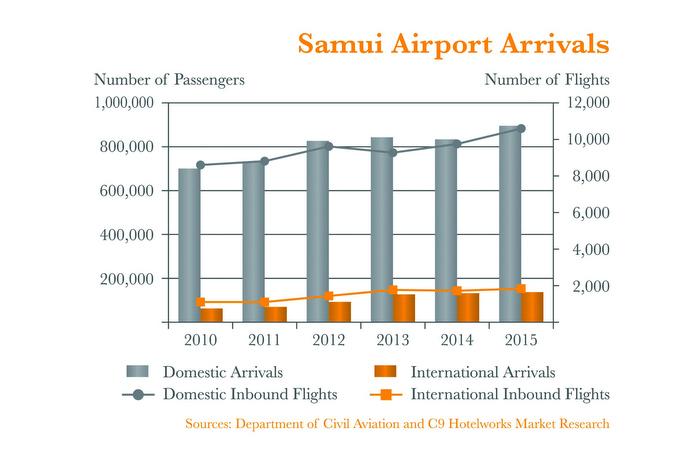 PHUKET: We live in a world where percentages seem to matter and growth dominates our horizon. I still recall growing up and marking off on a wall in our house how tall I was. I could not wait to be older, and the irony today is how I wish that I could instead roll back the clock.

In Phuket’s crowded market, hoteliers are increasingly griping about our high volume and low room rate business. Yet, on the island of Samui in the Gulf of Thailand, owners and operators are for the most part grinning about a sustained increase in room rates.

Without a doubt, airlift has a profound impact on tourism fortunes, and a decade-long feeding frenzy by proliferating low-cost carriers (LCCs) has changed our island’s landscape forever. Yes, everyone can now fly, and fly they do. Even the legacy airlines like Thai International are now under the gun and facing an uncertain future as the low-cost disruptors have flown into town.

Last year, Samui hit the one million mark for airport passenger arrivals, as Phuket edges closer to six million. The key difference is that while Phuket has a public airport under the Airport Authority of Thailand (AoT), Samui has a private airport effectively controlled by Bangkok Airways. Also, Samui has a long-term environmental control restriction limiting flights to 36 a day due to noise concerns.

So, airfares to Samui are in fact more expensive, and there are no LCCs in that market. But last year, the ceiling of flights to Samui increased to 50 a day. Compounding the surge in capacity was Bangkok Airways shifting away from ATR-72 aircraft and using more Airbus A-319s, which kicked in more seats. Passenger arrivals were up seven per cent year-on-year.

But where the key highlight of the Samui hotel market comes into focus is on room rates. Hotels were able to increase rates across the market by 12 per cent, which has a positive domino effect of increasing RevPAR (revenue per available room) by 15 per cent. Phuket, by contrast, has had to rely on volume to drive RevPAR and players in the local market are worried about whether or not this approach is sustainable for Phuket’s hospitality industry in the long term.

Investor sentiment has always favored Phuket which now has close to 40 new hotels in the development pipeline. In Samui the number is 14 with only 1,400 new keys, as properties tend to be smaller in Samui. However, famous international brands such as Ritz-Carlton, Sofitel and Holiday Inn will make up part of the growth.

From our research on Samui, one impact that is apparent is the performance imbalance of branded properties compared to independent ones. In a head-to-head comparison, the brands registered higher average rates by 24 per cent and premium RevPAR’s of 28 per cent. Over in Phuket we have witnessed a spate of new conversions to chain management by existing properties as well.

Moving forward, Samui is not without challenges given a limited road network, stretched infrastructure and a booming China market that is using nearby Surat Thani airport with low-cost carriers as an entry point.

Yet fundamentals in supply and demand remain strong. While in the past the airport limitation was viewed as a weakness, in the end it’s been a blessing in disguise for Samui hoteliers.

Across the land: Is Airbnb taking a slice of Phuket hotels’ profits?