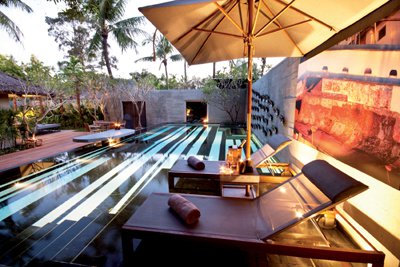 PHUKET: Sometimes more is more. At the other end of the universe less can also be more. Sounds confusing? It’s not really. Take the recent repositioning of the upscale hotel Indigo Pearl into an all villa and suite property as a prime example.

Working with legendary designer Bill Bensley, an estimated 1.2 billion baht has been invested in the extreme make-over. Size does matter, but it comes at a cost.

For those who remember the rich history of the property, it was one of the island’s first international hotels operating as the Pearl Village. Moving with the times, the new incarnation of the Indigo Pearl came about in 2007.

For Phuket based owner Wichit Na-Ranong the property continues to be a legacy, but he came to realize over the past few years that a commodities approach to tourism might not be the best way into the future. Especially when viewing a competitive landscape with a surge of internationally managed hotels and growth in nearby competitors, like the sprouting up of the North Phuket Mai Khao grouping. Add to this the new 262 room Pullman Arcadia set to open later this year down in Nai Thon and an InterContinental Hotels Group Indigo (no association) which will break ground this year and the competition looks fierce.

Throw into the mix a free flow of mid-market, same-same hotels coming up in every nook and cranny of the island and there is a realization that ultimately if you played a numbers game, once visitor arrivals flatten, it comes down to pricing.

Any observer of the stock market, currencies or any other business can tell you the gravy train has its limits and once you run out of rails, it’s hard traveling on rocky terrain.

Director of sales and marketing Anna Olsson said on the decision to downsize “Management has spent a lot of time over last couple of years studying market trends and listening to guests’ and partners’ feedback in the region and overseas.

“We are confident in Phuket’s future and believe that this investment and change in positioning of the hotel will bring in new demographics of visitors to Indigo Pearl and enhance the experience of our existing guests. We are currently seeing an increased recognition and demand for our product, enjoying increased forward bookings, high TripAdvisor ratings, positive guest feedback and a firm base of returning customers.”

As to how important the process partner’s feedback has been in the process she added, “We are moving in the direction of what our guests would like to experience in a hotel and a holiday, hence the transition and the repositioning is a natural progression to excel and deliver a distinctive and innovative experience.”

Needless to say after a recent visit to the property the outcome of the change could unabashedly be called – sensational.

Commenting on the process and inspiration Bill Bensley has said, “When we were engaged with yet another assignment to improve my favorite hotel, Indigo Pearl, our goal was to create Phuket’s most exclusive high end private garden and pool residences.We have designed each of these seven residences differently. I love black and white. The simplicity of the interior colors allows us to explore in a greater way textures and keeps us on the tin mining track.”

Taking a step back and viewing the current state of hotel development on the island, I think the decision to reevaluate, create a forward looking strategy and not simply take the road most traveled is laudable.

More hotel owners need to be leaders rather than followers and commodity based thinking when viewing a tropical destination island can be dangerous.

Less can often be more and at the end of the day, the best judge will ultimately be the financial bottom line of the property – which resonates from solid decision making.

In a process which is undertaken on a cyclical basis every four years, the fees on land transactions are set to be reviewed by Thailand’s Treasury Department.

The actual increase is on Minimum Assessed Value (MAV) and not land tax.

The MAV forms the basis of computing the transfer fee of two per cent when land or property is transacted.

Unlike many other countries capital gains is not paid on land transactions but is essentially a transaction tax which includes the two per cent, specific business tax 3.3 per cent of the declared value and one per cent withholding of the sales price which can be credited back as a tax credit.

Minimum assessed values for land in Thailand are notoriously low and tax exposure on sale comes down to single digits which by international standards is extremely low.

Another practical side is the often practiced under-declaration of the declared value of the land which is illegal, but often occurs when the two parties wish to minimized tax. This can come back to bite the purchaser though if they wish to list the full asset in their company books and are unable to do so if a wrong declared value is made.

So in a nutshell this is mostly a case of much ado about nothing, and not such big news after all.

The island is anxiously awaiting the reforms by the Finance Ministry and Bank of Thailand allowing foreign banks to open new branches in the first quarter of this year.

According to the Central Bank the move, subject to Cabinet approval, would give a green light to foreign banks to have up to 20 branches and off site ATMS throughout Thailand in a move which looks to be instigated by the upcoming Asean Economic Community (AEC) initiative in 2015.

For Phuket businesses and expats the limited offering of only one overseas bank – UOB – has been considered to be a negative factor.

Certainly one bank which often comes up in conversation is HSBC and perhaps it may not be too long before we see other financial institutions with a local branch.

Recently HSBC announced they are selling their Thailand retail and wealth management units to Bank of Ayudhya, but would continue with wholesale banking.