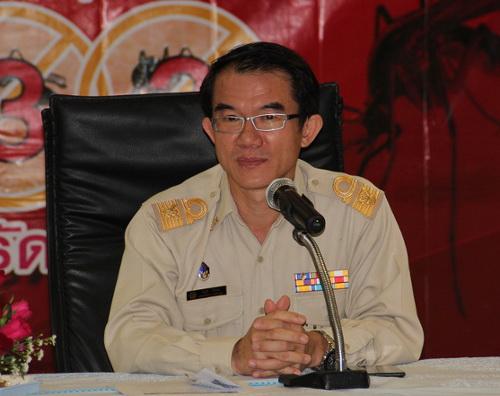 PHUKET: As the number of patients in Phuket diagnosed with dengue fever reached the highest level in 20 years, health officials met at Patong Hospital yesterday to discuss dengue-prevention measures in Kathu.

Patong was chosen as the location and the target focus for the meeting as the beach resort town is the most popular district for tourists on the island, said Phuket Public Health Office (PPHO) Chief Bancha Kakong.

“In Patong, we’ve had 25 reported cases of dengue in the past two months, and some were tourists,” Patong Hospital Director Sirichai Silapa-acha reported.

“However, there have been no deaths reported in Patong,” he said.

“We are continuing to urge people to cover or throw out standing water to prevent mosquitoes from laying eggs in it. We also advise people to use mosquito repellent when they go out,” said Chief Bancha.

This follows earlier efforts by officials to eliminate sources of dengue (story here).

“Anyone who has symptoms of what seems to be a common cold for two days or longer should come to the hospital and be checked for dengue,” Dr Sirichai urged.

Children diagnosed with dengue will be admitted to hospital. Adults with the disease do not necessarily need to be admitted, but must go to hospital to be checked every day, he said.

“We also have given mosquito repellent to people in every community,” Mr Somboon said.

In the first six months of this year, 1,193 people have been infected with dengue, 535 in Muang District, 471 in Thalang and 187 in Kathu, explained Chief Bancha.

“This is 3.2 times the rate of last year and the highest number of dengue cases we’ve had in 20 years,” he said.