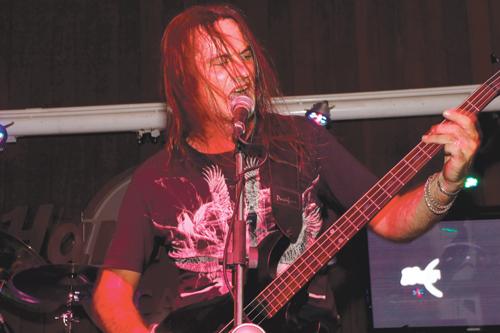 Based in Phuket, the band says their music reflects a variety of influences from “Stoner to Thrash Metal and Oriental music, all in a brutal and melodic melting pot lovingly termed ‘Mango Metal’.”

Scott Adams, writing on a famous metal website about the band’s debut record Welcome to the Black Void, says: “[It] is a supremely well-played and well produced album, weaving together all the best bits that hard rock and metal has had to offer over the last quarter of a century into a coherent whole that hangs together nicely – driven by the powerful vocals of Jon-Egil Ramslie, who also provides meaty guitar work.

“Ramslie is ably supported by the lithe rhythm section that is Huwy Williams (drums) and Stephan Audiger (bass), as the three combine spectacularly on tracks like Black Void to provide driving, compelling shards of heaviness, shot through with enough melody to keep you coming back time and again.”

The Phuket Gazette had the chance to catch up with the band following their recent concert at the Hard Rock Café in Patong. Here’s what they had to say:

Phuket Gazette: What are Kilgora’s major influences?
Kilgora: The best of everything metal in the last 30 years. The three of us have slightly different tastes and we’re open to a wide range of musical styles. We use all sorts of influences to compose Kilgora’s material and we want to be really original: you may recognize some of our influences in our songs but not in too obvious a way.

How has the band’s music changed since you first started?
Our music hasn’t changed. We’ve become a tighter band and better musicians and now have an album to show for it.

Is it tough to be a metal band in Phuket?
It’s not that easy to be a metal band in Phuket. Even though our music isn’t too extreme, there aren’t many venues on the island where we could perform. Metal music is not as scary as it used to be some thirty years ago. Still, there’s not a lot of Phuket visitors/residents attracted to this kind of music.

Does Phuket have a vibrant local music scene in your opinion?
The Phuket music scene mostly caters to tourists. There’s a large amount of talented musicians with diverse origins on the island, but the majority of them try to make a living playing cover songs in venues offering live music. Therefore, the Phuket music scene shows a lack of creativity. Kilgora is one of the few bands here composing, recording and producing original music.

What is the craziest thing to happen at one of your shows?
As Kilgora has only just started gigging, we’ll give you a few personal “crazies” from our drummer Huwy’s past: breaking his ankle on the second show of a US tour with the band Core and carrying on – playing for two months untreated was pretty crazy; playing to a packed house at Brixton academy in London was crazy for sure. Some other “craziness” cannot be printed in a family newspaper (laughs). Huwy has had a pretty crazy rock n’ roll lifestyle to say the least.

What are your goals for this project?
Like any band, we’d like to become big. We’ve been working together for two years now and were able to write and produce a debut album during this time. The music industry is not what it used to be, so we go at our pace, and hope that our steady way of working will produce some result in the near future.

We have already started composing for our second album and hope to find as many gigs as possible in Thailand, Asia and the rest of the world.

The band’s debut album Welcome to the Black Void is currently available for purchase via download at reverbnation.com/kilgora.

Phuket Gardening: Variety is the spice of life