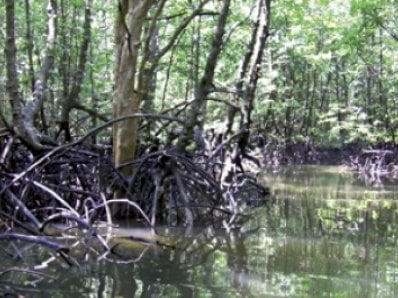 PHUKET: “Conserving the mangroves may not be as sexy as saving the rainforest, but it’s arguably even more important for the environment,” says Udo Gattenlöhner, Executive Director of the Global Nature Fund (GNF).

Funded by the German government, the collaboration between NGOs in the four Asian countries aims to rehabilitate a hundred hectares of damaged or destroyed mangrove forest while creating a network to enable effective knowledge transfer between the partners.

Jaruwan Kaewmahanin, Field Coordinator for the Trang-based Asia branch of the Mangrove Action Project (MAP) which hosted the initial project meeting in Krabi said, “Mangrove forests are a really important habitat and nursery ground for fish, plants and many other organisms, and around 40% of the World’s mangroves are located in Asia.

“While they’re one of the most productive, they’re also amongst the most threatened ecosystems on Earth. Half of the world’s mangrove forests have been destroyed and the rate of destruction has been fastest in the last 30 years,” Jaruwan said.

Local people living around the coasts or near tidal areas are becoming increasingly aware of the benefits of retaining intact mangrove forests, which can ensure a sustainable source of income from the harvesting of fish, crabs, wild shrimps as well as other animal and plant sources of food, fuel and medicines. They also provide a defense against coastal erosion, storm surges and even catastrophic events such as the Boxing Day tsunami of 2004.

Bang Don, a community leader in Ban Lang Da village on the Krabi estuary, has been a consistently supportive advocate of efforts by MAP and Wetlands International to restore lost mangroves near his village. He says that many of the local mangroves have been destroyed during his lifetime and that he has observed first-hand, as a result, the decline in wild fish and other species in the area.

GNF’s Udo Gattenlöhner says that any efforts to rehabilitate lost mangroves must engage with, and support, local interests. Local communities must be fully involved and supportive, he says, and they must see tangible benefits from the results of mangrove rehabilitation.

At a restoration project near Ban Taleh Nok, close to Ranong, Nipa Palm was chosen as one of the main species to plant in consultation with local people as it provides a direct economic value to their community. However, the choice of mangrove species
to plant is highly dependent on factors such as water salinity, depth and flow. Potential economic value has to consider whether local conditions will enable plants to thrive.

The GNF project partners will utilize the principles of Ecological Mangrove Restoration (EMR) which is being promoted by MAP as the best method to rehabilitate mangroves. During the meeting in Krabi, representatives of the partner organizations received training in EMR techniques which offer a more holistic approach to mangrove restoration incorporating consideration of the wider ecosystem and including the interests of local people.

The EMR approach starts from the premise that mangrove forests may recover naturally without the need for extensive planting efforts, and recommends that inhibiting factors such as blocked waterways are first corrected. Restoring the natural hydrology is a key element of the EMR approach to mangrove rehabilitation, returning water flows to their original courses where this is possible. Planting is only utilized when the level of mangrove recovery doesn’t meet the objectives of the project.

One of the difficulties associated with efforts to restore mangrove habitats in Thailand is the existence of regulations which forbid the use in mangrove areas of heavy machinery which can be very helpful in restoring the original tidal exchange patterns, breaking down former pond walls and performing other heavy earth moving functions.

While commercial shrimp ponds in places like Ban Taleh Nok have been created by removing mangroves (and often without legal right to use the land) with tractors and other large machines, those attempting to restore them may not be allowed to use similar machinery to rehabilitate them without going through the bureaucratic and often time consuming process of obtaining a permit. While the regulations have been designed to protect mangroves, in some cases their effect may be to hamper efforts to restore them.

Jim Enright, MAP’s Asia Coordinator, explains that having arranged a contractor with heavy machinery for rehabilitation work at Ban Taleh Nok, the NGO waited almost five months for official permission to go ahead. Becoming frustrated with the delay as project funding was only for a one year period, MAP proposed an alternative approach
and succeeded in motivating the local villagers to clear the drainage channels and reconfigure the former shrimp ponds equipped with only spades, specialized buckets and shovels.

Enright said, “This actually turned into a win-win situation. The work was done in a reasonable amount of time and having been so engaged in the activity, the community now has gained full stewardship for the restoration site and will make sure a healthy mangrove area is maintained here.”

Experts have calculated that Asia has around 250,000 hectares of abandoned shrimp ponds which were previously mangroves. Much of this area is capable of being returned to healthy mangrove through restoring the hydrology and allowing natural regeneration to take place without the need for planting. Doing so should ensure a return to the biodiversity of the original mangrove forest over time.

An important goal of the GNF programme is the establishment of an international network for the protection of mangroves, which will meet regularly to discuss activities and exchange experience and knowledge. One of the outputs from the project will be the publication of a guidebook to help inform restoration efforts elsewhere.