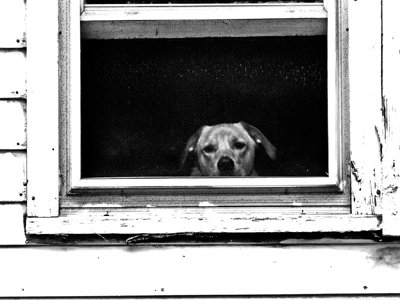 PHUKET: Canine separation anxiety – part of the joy of having a dog is the tight bond we enjoy with them. However, separation or isolation anxiety in dogs can be a huge problem and, somewhat ironically, is a key reason that many dogs end up in animal shelters or abandoned on the streets.

But one of the bigger problems is that it is also one of the most commonly misdiagnosed behaviors in pet dogs.

Separation anxiety is found naturally in many canine species, particularly the more social species. These distress behaviors help canine pups adapt. They exist to prevent the puppies from wandering too far from the pack, and to assist the mother in locating the ones that do.

The relief and comfort of social contact reinforces the distress behaviors that a puppy displays. For example: puppy feels anxious, whines for his mother, she comes back, puppy feels better.

With domestic dogs, most puppies are removed from their mothers and litter mates at an extremely early age when they are neither biologically nor psychologically ready to be on their own. This transition is usually harsh and abrupt instead of smooth and gradual, and in the pup’s new home things usually go one of two ways.

He may spend a lot of time by himself, be crated, confined or isolated during the day when his owners are at work, and be placed in a separate room overnight. Or he is constantly cuddled, held, given endless attention and never left alone.

In the first instance, the pup may be traumatized by the lack of familiarity and isolation from the new pack (the family) and this isolation provokes anxiety. The pup vocalizes continuously for his owner to return and starts to feel that he cannot control or predict his environment. In the second instance, the pup never learns to be on his own and becomes totally dependent. This is the making of a neurotic animal.

Some dogs are more at risk than others. There are certain aspects of a dog’s history that may make them more susceptible to developing canine separation anxiety, but since many of us have adopted “street dogs” from organizations such as the Phuket Animal Welfare Society, we generally don’t know anything about their past.

Here are some of the risk factors that increase the chances of a dog developing separation or isolation anxiety:

• Punitive Rearing Practices – which is all too common here in Thailand. The general mass market for puppies is governed by quick money, rather than care for the animal. Thinking we’re ‘helping’ the animal by buying it simply fuels the market. (I appreciate the flip side of this argument and clearly, this is a debate on its own!)

• Change in Routine – from lots of time spent with you, to very little time. Dogs are masters of routine, so things like changing jobs, moving house, girlfriend moving in, are all things that can upset their routine.

• Acute Awareness of Owner’s movements – Does your dog follow you from couch to fridge, to kitchen counter and back to couch? Scratch the door of the loo while you’re busy and then follow you to wherever you’re heading next? Some owners think its cute, but it can create serious neurological problems.

• Trauma – A traumatic event experienced by a dog when he was alone could also lead to the development of separation anxiety, particularly if these negative experiences happened in the first few months of their lives. For example, if they were home alone during a loud thunderstorm, they may associate being alone with the onset of something scary.

Your dog will typically anticipate an impending separation from associated cues in his environment. Your dog learns these cues, many of which are subliminal, from your pre-departure routine. The main things may be: an alarm clock ringing, kids getting dressed, or you picking up car keys. The minor details show in your body language, things that we don’t notice we’re doing.

The anxiety begins with the initial cue and steadily grows until you actually leave the house. To round it off, we can often exacerbate the situation by trying to pacify our dogs by telling them, “I’ll be back soon, it’ll be okay.”

Your dog, however, cannot control the situation so his frustration level rises and distress grows steadily, peaking usually within 30 minutes from the time you left. From there, the anxiety levels slowly dissipate at a rate specific to each dog.

However, as the dog slowly recovers, any stimuli may re-sensitize him, such as another dog barking, a car driving by, or a delivery man coming to the door.

There are numerous signs and symptoms exhibited by dogs experiencing separation anxiety, such as excessive barking or whining, scratching or digging, frantic pacing, or chewing furniture, doors or window frames. Any increase in the frequency of urination, wet footprints from sweaty paws, drooling or a highly exaggerated greeting routine are all symptoms to look for.

One of the reasons separation anxiety seems more prevalent today than a few decades ago is that it is often misdiagnosed by the average pet owner.

However, just the absence of symptoms doesn’t mean your dog isn’t suffering from it.

House soiling can be related to anxiety, but there are many other potential causes for that, such as incomplete house training, lack of access to appropriate elimination areas, unreasonable owner expectations (expecting the dog to “hold it” for 10 hours or more), fear, excitement, submissive elimination, or physical incontinence.

Russell D. Russell IACP, ADPT, UKCBC is a professional canine trainer and behaviour specialist. He can be contacted through tk9a.com