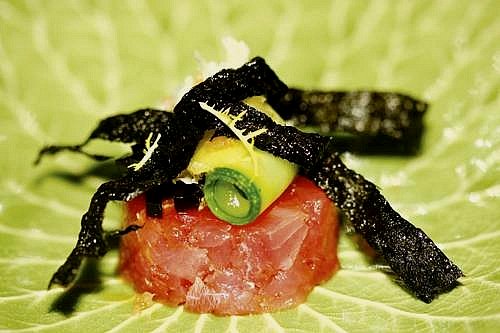 PHUKET: Trisara is a very imposing but undeniably beautiful resort: Set on 40 acres of hillside lushness on the northwestern coast of Phuket, every one if its pool villas afford gorgeous sea-and-sunset-views out to a mysterious looking rocky promontory in the Andaman Sea.

The resort is the sort of place that celebrities come to and, well, disappear for a few days. The last time I was lucky enough to stay in one of their sumptuous villas, my neighbor was none other than ‘Squiggle’… the Artist Formerly Known as Prince. And no, he didn’t answer the door when I asked him if he had a cup of sugar to spare.

But on this visit, heading down to ‘Seafood’, the recently opened beachside restaurant, we run into the resort manager, Antoine Melon. Far from being melancholy, or melon-shaped, as his name would suggest, he’s an in-shape, genial French polyglot who has enjoyed a career rubbing shoulders and studying with the big names of worldwide cuisine. He is quick to interject an anecdote about them. In other words, and to say the least, Antoine knows where the land lies, culinary speaking.

Trisara is the only five-star resort in Phuket with a Thai executive chef and no prizes for guessing as to what’s served up here at Seafood. The selective, rather than extensive seafood menu, is prepared by Chef Ka, who has worked/studied in Sydney, New York, Spain (at El Celler de Roca, the second-best restaurant in the world) and Singapore, with one and two-star Michelin chefs. Subsequently he has absorbed a lot of the revolutionary slow-cooking techniques that have surfaced lately. Without going into too many confusing details, this form of cooking entails searing food then inserting it into bags and slow-cooking it, resulting in the maximum amount of enzymes, vitamins and, of course, flavors.

This nautically-themed restaurant has options to dine on the beach, on the fan-cooled terrace or in the air-conditioned interior with programmed in-house music in an Adele and Eagles-free environment.

But outside, the audio factor at Seafood is just the sound of the waves breaking on beach mere meters away, the gentle whisper of the sea breezes plus specialized wait staff who speak very good English and who anticipate your every need.

So far, so good, but it gets even better – after a dish of mixed international oysters (the Phuket versions acquitted themselves admirably) is a spanking fresh tuna tartar with pomelo, citrus, ginger and dried seaweed and an almost perfect sole meunière with green asparagus and potatoes. Yummy stuff, and a dish once described by a turn-of-the-twentieth-century writer as ‘life changing’ and you couldn’t get a better rendition of sole meunière than here at Seafood; it reminded me of Proust’s madeleine.

We also enjoy a sea bass dish featuring squid, sugar snap peas, watercress and red quinoa. All this, along with a heavenly dessert selection and a 2010 Whispering Angel rosé from Provence makes for a powerful culinary treat.

‘Trisara’ is Sanskrit for ‘three steps from heaven’ and this location, three steps from the Andaman Sea, is a pretty cool terrestrial attempt at recreating a nutritious Nirvana.

Phuket Arts: The story of a teenage refugee