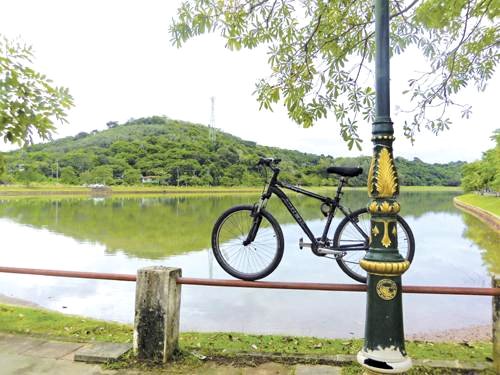 PHUKET: Welcome to Blazing Saddles as we take you on one of Phuket’s most famous and favorite bike rides, down to the charming southernmost beach on the island’s west coast, to Nai Harn.

It’s a bleary 6am start as you clamber into your Lycra biking attire, adjust the funny codpiece bulging at the front of your shorts and wheel your bike into the car park in front of Fisherman Way Business Park next to Tesco Lotus on road to Rawai. This is a great place to start the ride, with lots of off-road car parking, and at this hour you will often be greeted by a hearty band of fellow Lycra Louts sipping from their water bottles and pontificating airily about the morning’s conditions.

The sun is rising over Koh Lon and Chalong Bay to your east and little wispy beards of cloud are clinging to the crests of the Nakkerd Hills between Chalong and Kata and of course atop all of this, Big Buddha is watching!

This ride has become popular as it takes you through quiet, traffic-free back lanes to the lovely lake just inland from Nai Harn Beach, where you can do as many loops as you wish to increase your total distance. You can make the ride as challenging and vertiginous as you wish by adding in climbs up the Viewpoint and Prom Thep Cape hills. You can factor in a cooling swim and you can finish it off with a healthy juice, or a naughty cold beer, at a true Phuket beachside icon…Nikita’s bar and restaurant on the Rawai Beachfront.

Many Westerners live in this southern quadrant of Phuket, and as the island’s population of MAMILS (Middle Aged Men In Lycra) has increased, so has the popularity of this ride. In addition there are now a huge number of very fit Thai cyclists who work out around the Nai Harn Lake doing their laps in a blazing peloton of perspiration and testosterone and tending to put the more quiescent foreign Pedal-Files to shame.

If the last two sentences seem a little gender-biased, it is intentional, as only a few western lady riders are to be out cycling in Phuket as yet and even fewer Thai ladies. However, the day when we see far more Lycra-clad lovelies working out on their bikes can’t be far off and will constitute yet one more excellent reason for you to “get on yer bike!”

Clamping crash hat firmly in place we set off south along Rawai Road at 6:15am. The traffic is still relatively light and it’s 25 degrees as we head to Nai Harn. The straightforward way of doing this is up and over the long, modestly inclined hill on the wide main road, then down into Rawai and along the waterfront. Here you can either fork left taking you over three big challenging hills, the middle one being Prom Thep Cape and then down to the Nai Harn Lake. Alternatively, go straight ahead to little Ya Nui Beach then turn right over the last of the three challenging hills – Windmill Hill with its viewpoint out over the southern Andaman very much worth a stop. Or for a gentler ride, fork right at the end of Rawai Beachfront over the lesser incline of what some call DILLIGAF Hill (it has a bar near its apex delightfully named the Do I Look Like I Give A F*** or DILLIGAF bar) and then left at the crossroads, down to the lake.

While the Rawai Road is a busy one, it is wide, with good sight lines so it should cause no problems. If you fancy a more bucolic ride with less hills, turn right off Rawai Road about half a kilometer after the start, at the turning between the Family Mart and 7-Eleven, just before the fuel station. Then immediately fork left and cycle up the back lanes to Sai Yuan Road. Turn right here and only stay on this until the next right turn, as this is a busy, not very wide soi and is the haunt of many tourists coming to Nai Harn.

Again meander along the back sois until you hit a T junction then go left down to the Y junction and take the right option signed to Prom Thep. This road takes you past Da Vinci restaurant, then the Phuket Art Village, which is well worth a look around. Then take the next right at the Villa Suksan sign, taking you along some lovely back sois all the way over to Nai Harn lake.

The exactly two km circuit around the lake is the morning haunt of joggers, dog walkers, courting couples and lots of other Lycra Louts. You can do as many laps as you wish, stopping on the island in the lake to sit under the trees for an orange and a chat.

Finally you can ride along the little path at the edge of the beach itself enjoying the shady Casuarinas and stopping for a dip ONLY if the flags tell you it’s safe. Strangely enough, there’s also a little road right through the car park of the Royal Phuket Yacht Club, which then takes you along the northern promontory of Nai Harn to a charming little beach where you can get a juice and enjoy sensational views of the whole bay.

We usually gather at Nikita’s on Rawai Beachfront road for a juice, coffee, or a beer before cycling back to Fisherman Way. With a few loops of the lake, the total ride will be around thirty clicks, but if you do factor in the three hills you will have given your body a thorough work out and you should feel justifiably proud of yourself! Happy and safe riding!

Phuket Diving: Building the reefs of the future