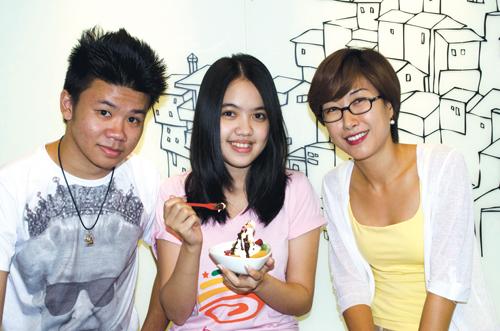 PHUKET: The latest Korean craze to hit Thailand, after TV dramas and the Gangnam-style dance, is soft-serve frozen yoghurt, also known as “FroYo”.

Opened recently in The 6th shopping mall in Patong (just across the road from Jungceylon and next to the White Tiger Bar), Bang Frozen Yoghurt offers a healthy alternative to traditional full-fat and sugared ice cream.

“Although frozen yoghurt is very popular in the USA, Australia and Europe, it actually originated from Korea,” says Sujin Lyu, the Korean- American owner of Bang Fro Yo.

Sujin, an English teacher who has lived on the West Coast of USA and is married with two young children, traveled across Thailand last year. In Phuket she couldn’t help noticing the lack of frozen yoghurt here.

Hoping to capitalize on this business opportunity, Sujin, instead of opening an English language school in Korea as planned, opened Bang Frozen Yoghurt.

Situated in one of the colorful Sino-styled shop houses in The 6th, the light green façade of the establishment leads inside to a modern and playful interior decorated with cut-out stencils. The atmosphere is carefully created to be “cool, hip and friendly,” in an effort to entice young people. An L-shape sofa lines one corner of the room, while a few tables and chairs on the terrace provide additional seating. There is also free WiFi and laptop stations.

From the soft-serve ice cream machine, customers fill their cups with frozen yoghurt (at the moment the flavors are: plain, and mixed wild berries, but more flavors are coming soon). You then select your fresh fruit and cereal toppings and add flavor with either jam or chocolate sauce. Toppings such as colorful sweets prove popular among young children who, according to Sujin, love to play with their dessert. Bang Frozen Yoghurt is priced at 70 baht per 100 grams.

“Live yoghurt is a good source of calcium. It contains good bacteria or probiotics, which are known to be beneficial for our health by warding off germs and helping boost immunity. And they don’t die through the process of freezing,” assures Sujin.

Although frozen yoghurt is a generic term, Bang is Sujin’s own creation made from live yoghurt and real fruit. It is low in fat, sugar and sodium, making it a perfect snack for people with a weight problem or health-related issues.

Along with frozen yoghurt and in an attempt to feature things Korean, Sujin stocks two types of Korean Soju or rice wine: a strong Hong Cho drunk all over Korea and a sweeter version called Yaku Soju. “These drinks are hard liquor, and I strongly recommend people not to drive after drinking them,” warns Sujin.

“Frozen yoghurt is a popular snack of choice for many Americans,” says Sujin. Leonardo DiCaprio was once booked for stopping in a No-Parking area in Beverly Hills. Rumor has it that he flouted the law waiting for his FroYo.”