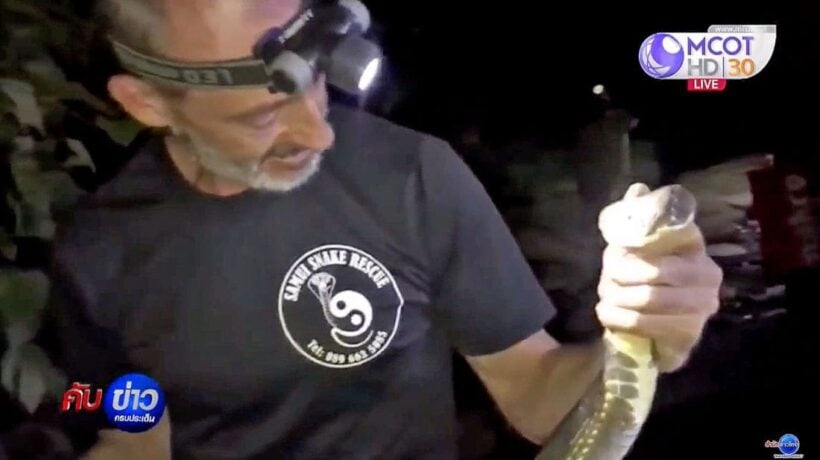 Thai television TNA has show a video of the British resident who lives in Koh Samui responding to a call to catch a King Cobra on the Gulf island. Philip has lived in Samui for 18 years and now is a volunteer at “Samui Snake Rescue”. He likes to help all manner of animals in distress but has a special affection for snakes.

The presenters say that locals were amazed to see him use his bare hands to catch the three metre long King Cobra. The cobra was returned to the wild.

Philip, speaking to ThaiVisa, says that he is originally from Stoke on Trent.

Philip gets a lot of help from Wildlife Friends Foundation Thailand, run by Dutch activist Edwin Wiek out of Tha Yang, Petchaburi.

“I am now officially sponsored by wfft.org Wildlife Friends Foundation Thailand which has stopped me from going under this year but I don’t get many donations generally”, he said.

Donations to Samui Snake Rescue can be made via their Facebook page.

“I have no time for a day job I’m kept very busy with snake and wildlife rescue…I have other business interests that make me enough money to live on but the donations are purely to keep this service going”.

Check out the YouTube clip of the TNA story HERE.