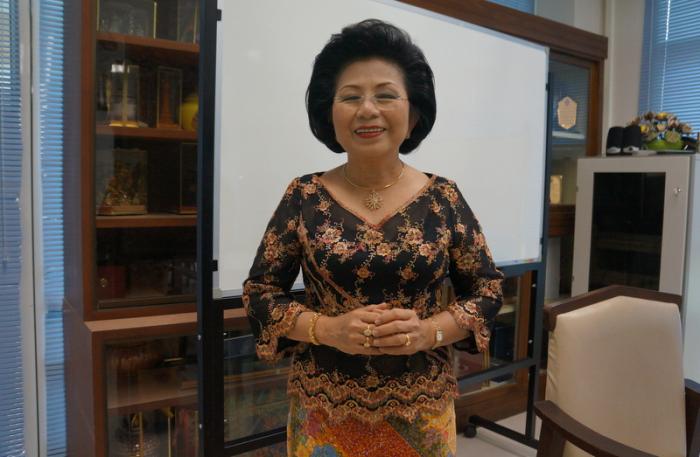 PHUKET: Phuket City Mayor Somjai Suwansupana, 64, is a true Phuket native, born and raised in the heart of Phuket Town.

Ms Somjai recalls her childhood fondly, but frankly admits that she wasn’t an outstanding student in her school years.

However, she still chose to further her education after completing her basic education. She went on to obtain a bachelor’s degree in Marketing from Bangkok University and then a Masters in Social Development from Prince of Songkla University.

Her life turned around when she was introduced to the world of local politics by former Phuket City Municipality Council President Wiroj Bumroongwong – a man she says is the true inspiration for her craft.

She has worked for the municipality since 1980 and was elected to be the mayor in 2004.
“I became a member of the Phuket City Municipality Council in 1980, and didn’t know much about the field at first,” said Ms Somjai.

Her first job as a councilwoman was in the Welfare and Education Department, which helped her take time to grow as a councilor.

“I make sure I always keep in touch with my staff, meet with officials, keep myself involved with the community and remain up-to-date, so people can see that I have proven myself by taking the necessary actions and not just by making empty promises,” said Ms Somjai.

One of the aspects of her job that she stresses as being the most important is planning ahead of time.
“I believe in long-term planning – at least 20 years into the future – not just a few years at a time,” she said.

Ms Somjai says that traditions are very important to her and makes sure she represents them by wearing the local Phuket dress called a ‘Baba’.

“My dress represents who I am; when I wear my traditional dress, people recognize me and that makes me proud. Phuket has a unique generations-old culture and I hope to see it last forever,” Ms Somjai said.

Although the problems facing the city add more than a few complications to her job, Ms Somjai said she tries not to be overwhelmed by them, instead striving to meet every challenge head-on.

“Thinking positive and looking ahead are both key elements of my job. It’s extremely important to keep developing yourself, your work and your thought process,” Ms Somjai said.

“I will never stop learning and will continue to do whatever needs to be done to improve my beautiful hometown.”