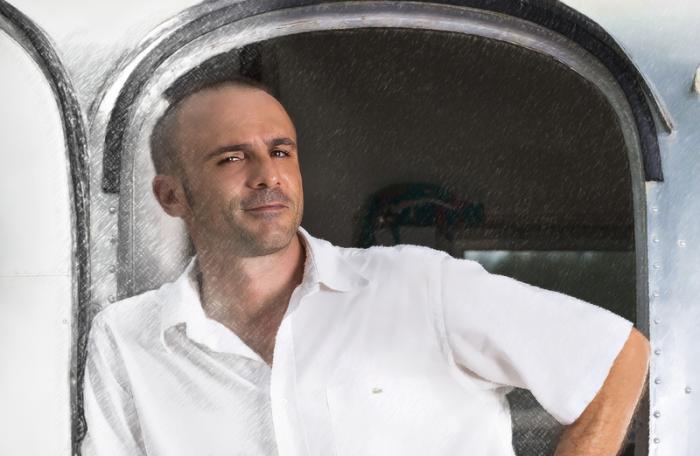 “Initially, I thought it was my bike breaking down again, so I stopped and checked it. Everything was fine with the bike, but soon after, people on foot, bikes and in cars started gathering around me, as I was in a ‘safe zone’. When I looked down from the hill, all I saw was the frothing water full of floating debris,” says Mr Trapani, an established 43-year-old photographer and founder of ‘Phuket Paparazzi’, best known for his ‘Bohemian’ photography workshops on the island.

However, in 2004, Mr Trapani was still a tourist in Phuket who had taken a long leap off the corporate ladder he had climbed back in Milan, Italy. His Bachelor of Arts in Business Administration and Master’s degree in Marketing and Foreign Commerce landed him a job in the marketing department of IT-multinational Fujitsu-Siemens Computers.

Less than a year later, he took a better position at Toshiba Computer Systems, before picking up a full scholarship to complete another Master’s degree in Brand Communication. Then, two years into working in the marketing and communications department for a main Italian gas supplier, Mr Trapani asked a very simple question: Why? Why was he doing all of this? Was it what he wanted to do or just him doing what was expected of him?

“After a few days of thinking very deeply about it, I decided to take a one year ‘sabbatical’ to really understand what I wanted to do with my life,” Mr Trapani explains. However, he, like everyone else holidaying along the Indian Ocean coastline on December 26, 2004, had no idea how completely the trip would transform his life.

Mr Trapani joined thousands of people along the Andaman coast in the clean-up effort directly after the waves devastated Phuket’s west coast.

“After the first few days of helping, I had to do a ‘visa run’ to Hong Kong, while there, I read an article in the Bangkok Post explaining that the Department of Marine and Coastal Resources in Phuket was looking for experienced divers with their own equipment to volunteer,” Mr Trapani says.

He contacted them as soon as he returned and spent the next several weeks cleaning up the seafloors of Phuket, Racha Island, Phi Phi Island and even the Similan Islands.

It was during his time as a volunteer that Mr Trapani found himself suddenly side-by-side with Thais who did not speak much English, but who he joined for fried rice provided by the authorities as they all worked toward the same goal. The deep friendships established ensured that the course of his life was not to flow back into the mainstream corporate world, but instead something spectacular and extraordinarily different from those with whom he had shared offices and classrooms.

After a short stint as an English teacher, Mr Trapani became a full-time dive instructor in Phuket, with a passion for capturing the underwater world on a camera – just as underwater film cameras were becoming passe.

Armed with a Konika Minolta and an underwater housing, he began to build his stunning portfolio as he documented the wonders of the Andaman.

“That camera was a great piece of equipment 12 years ago, a bit slow in the focus process, but it had a high performing lens and sensor. The problem with the slow focus made me gradually lean toward taking pictures of small and static subjects – macro photography,” he says. “My camera was producing astonishing results, and once imported on my laptop, I could see some of the most beautiful details and patterns that couldn’t otherwise be seen with the naked eye. That really opened up a whole new world for me.”

As he upgraded his gear and built his portfolio, having several images published in prominent diving magazines, Mr Trapani began his iconic evolution: moving from sea creatures to those on land. Dry photography had its advantages; it allowed him to control more elements in his shoots, the most important of which was light.

Having spent several years developing his own style – always searching for new ways to understand and improve his craft – Mr Trapani brought in a playboy model and her male counterpart for the launch of the first of his four Bohemian photography workshops (story here). The most recent workshop organized by the Italian brought in Sony’s ambassador for the Philippines, Manny Librodo (story here).

Now, with his new wife Katia by his side, Mr Trapani is soaring to new heights as he dives into the world of aerial drone photography and videography. Though aerial photography might appear to be the last step for Mr Trapani in the evolutionary ‘March of Progress’, there is a lot of room to grow just beyond the ionosphere.