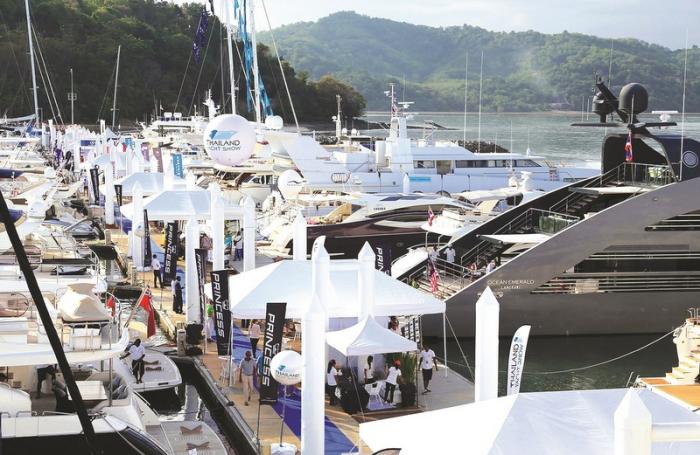 PHUKET: We’ve had one regatta, two superyacht rendezvous and a yacht show in the last month in Phuket. Squeezed in between all of that was the little-discussed Thailand Yachting Forum (TYF).

Held a day before the Thailand Yacht Show, the second TYF was this year hosted by Phuket Boat Lagoon.

Juthaporn Rerngronasa, TAT Deputy Governor for International Marketing, kicked it off with a presentation about the Andaman’s marine tourism potential.

She was followed by Jiraporn Jantasiri from the Marine Department. There was much fanfare last year about the Superyacht Charter Licence, and at this year’s forum, many were waiting to hear about progress. A few sticking points such as having to pay VAT on the value of the yacht, and the need for a friendly approach from immigration to international crew are still ‘in process’.

Some would say little has changed, but that would be too simplistic. That the relevant authorities are aware of the problem and indeed acknowledge the problems, is progress.

An unnamed consultancy is apparently looking into all of this and will present their findings and suggestions.

Ms Juthaporn also talked about making ‘Thailand the Marina Hub of ASEAN’ and has identified eight potential marina sites around the country.

The Marine Department has come out with full details on these eight locations. Two each are in Phuket, Phang Nga and Samui, and one each in Chonburi and Traad.

In Phuket, one is in Kung Bay Marina (north of Ao Po Grand Marina) – a privately owned site in the final stages of gaining all relevant permissions. The second is the Asian Marina in Phuket Town, which is already developed as a dockyard.

Three speakers from the Thailand Marine Business Association (TMBA) then took to the podium. First up was Vincent Tabuteau of Asia Marine, talking about ‘Yachting in the Andaman Sea’, followed by Ron Patston of Gulf Charters in Pattaya who spoke in detail about Pattaya and the need for Thailand to be promoted as a whole.

The final speaker from TMBA was its chairman Matthew Na Nagara, who spoke about ‘Marina Infrastructure in Thailand’.

The last speaker on the cards was Trenton Gay, CEO of Gold Coast City Marina & Shipyard, who highlighted some lessons Phuket can learn if it wishes to attract more superyachts.

TYF has great potential. If more people are aware of it, they will attend in greater numbers. Such a platform is needed and I look forward to attending a bigger and better edition in 2017.