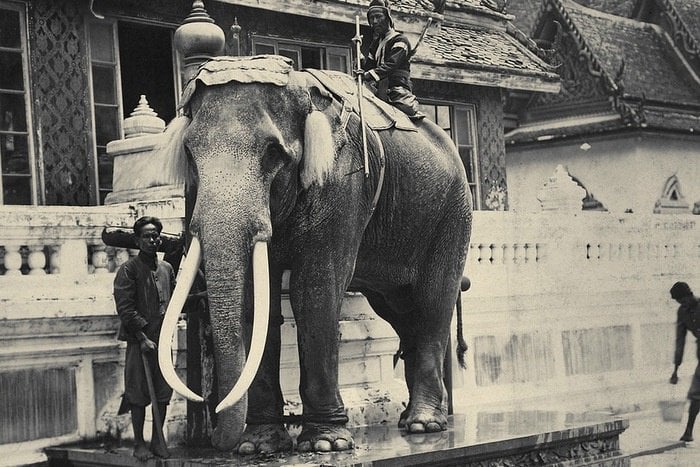 PHUKET: Elephants have always held an important place in Thai history and culture. In an age that predated bulldozers and cranes, Siamese builders and loggers tamed mighty elephants and used their incredible strength to clear forests, transport heavy loads and even build cities.

In war, Siamese kings and generals rode elephants into battle. Sitting atop elephants not only gave Siamese lords a formidable pose, it also offered them a position of safety, high above the carnage of battle.

For all of these reasons, Thais revere the common elephant even to this day. However, there is a class of elephants, commonly referred to as chang phueak, or white elephants, which are exceptionally rare and have been highly sought after by monarchs of Burma, Thailand, Laos and Cambodia for centuries, in the belief that they are sacred animals.

White elephants are sometimes confused with being albinos, but they are not. In fact, they are not white at all. They look very much like normal gray elephants, however, patches of their skin are dotted with a pinkish-white tone.

Elephants were regarded as celestial creatures. When a monarch ascends the throne, the spotting of a white elephant could provide legitimacy to his new reign. If a white elephant was found with the physical characteristics that are considered auspicious, it had to be brought to the palace with pomp and ceremonial rejoicing.

Physical characteristics that qualified an elephant as ‘white’ included light pink spots on the skin, large eyes rimmed with white, jet-black irises, two pronounced bumps on the forehead, a tail that hangs straight away from the body and a long trunk.

Besides these physical characteristics, a white elephant must also possess a superior personality to the common elephant. Traditionally, specialists from the elephant division of the royal court will assess the animal’s personality. An intelligent elephant, for example, will run ahead of its pack at bathing time, getting into the water before the rest of the herd can follow and churning the mud from the river bed. An intelligent elephant will also learn to swish food it catches with its trunk in order to get rid of insects before eating.

The lotus flower is a symbol of purity and knowledge. The white elephant is also a symbol of fertility and success. It was believed that if a king kept several white elephants in his stables, he would have a long and prosperous reign. These elephants were treated like royalty. They were not used for heavy labor, war or any kind of work. They had to be cared for by a royal veterinarian and fed only the best food. The death of a white elephant was a dire omen and signaled disaster for the kingdom.

The English dictionary, however, found a new meaning to the term ‘white elephant’, which was less ‘sacred’ and more ‘burdensome’. Early Europeans reported that white elephants were costly to maintain, despite the fact that they could not be put to any use. The term ‘white elephant’ even entered the English language in the year 1607 to figuratively describe a burdensome or costly possession, which presented little or no value to the owner.

Perhaps the term is derived from the practice of earlier kings of Siam to give rare, auspicious elephants to ambitious or boastful courtiers. In the old days, this was perceived to be such a great honor that the courtiers would have no choice but to look after the animal. It had to be given the best food, and a lot of it, despite the fact that it could not be put to work. In the end, many unwilling owners were often ruined by the enormous cost of looking after a white elephant.

The Dutch merchant wrote that the king’s white elephants lived in royal quarters, had their own retinue of attendants and were fed on plates of gold. Van Vliet also suggested that the elephants were not only valued for their color, but also because of their superior intelligence and sensitivity.

According to Van Vliet, there were between 400 to 500 elephants around the capital city of Ayutthaya during the reign of King Prasat Thong, during the 17th century.

During his stay in Ayutthaya, Van Vliet mentioned a short account of the death of a white elephant. In the year 1633, a young white elephant was caught and brought it the palace. It died shortly afterwards.

King Prasat Thong was so upset that all the slaves who had guarded and assisted the animal were executed. Later, the king himself paid homage to the dead elephant and gave it a splendid cremation. All remains that had not been consumed by the fire were collected in a box and
buried at a royal temple.