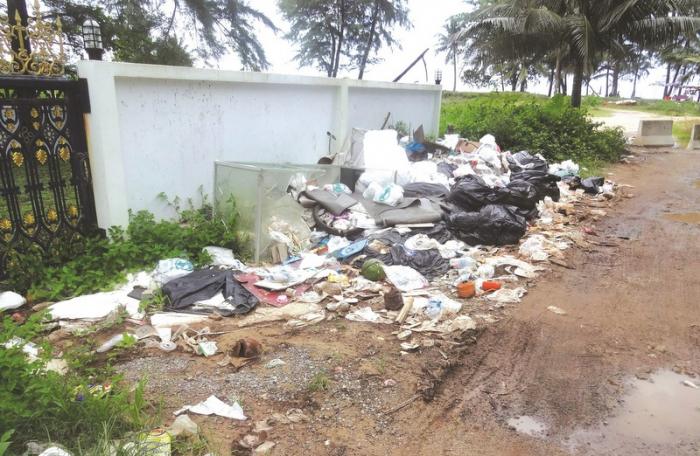 PHUKET: I was once sitting in an open-air Chalong eatery when six uniformed girls arrived for lunch.

Obviously part of a team, they ordered a communal dish, which duly arrived: a large steaming bowl of “tom yam kung” and six smaller bowls. One girl took it upon herself assiduously to clean each bowl by rubbing it with three pink tissues. The bowls were soon positively gleaming, but the crumpled tissues – all eighteen of them – were casually discarded on the floor where the wind immediately began to blow them in all directions.

One small anecdote, it neatly illustrates a fact of life here. There is, laudably, a massive preoccupation with personal hygiene. The girls always look immaculate, and cases of food-poisoning, even in the tin shacks and mobile ‘samlors’ laden with food, are rare.

But there is no corresponding concern for the natural environment. In fact, it appears that trees are there to be hacked down as encumbrances to so-called ‘progress’, proper wastewater and land-fill facilities are low on the list of governmental priorities, unused land is a place to dump rubbish, buses and ancient pick-ups are allowed to spew out toxic fumes, herbicides are used with impunity. I could go on…

Today I drove past Nai Harn Beach. In fairness, it is one of the better kept beaches on the island, but there are still no public toilets or showers, and no adequate facility for rubbish disposal. Ironically, there are two prominent visual signs beneath the casuarinas trees – mercifully spared from the axe – which state at what rate different materials degrade. So far, so good. But one of the signs had toppled over in the recent storms, and below each sign were only two containers for rubbish. Two were missing, presumed stolen. Surrounded by plastic bags, they were clearly inadequate.

One finds similar examples all over Phuket: wire cages or plastic bins overflowing with rubbish. It would be much worse were it not for the army of human scavengers who sift through these smelly piles to salvage glass and plastic bottles, paper and cardboard, aluminum cans and anything remotely recyclable. They are a wonderful asset to the community, and we should all support them by saving our re-useable cast offs for them.

The worst aspect of this mindless dumping is what in the UK is called ‘fly tipping’. As Phuket grows, so do its mounds of rubbish. And since Mr Average shows so little concern for the environment, and does not want to pay for garbage collection, why not find a quiet place, preferably at night and unload all your builder’s rubble, broken glass, plastic and polystyrene packaging, dirty oil, kitchen waste and the rest.

My own residential area in Saiyuan has recently become a focal point for ‘fly tipping’. Since there are green areas – they are getting less green by the day – they are ideal places for plonking a truck load of indigestible and often foul-smelling trash.

Unfortunately, even the best intentions don’t always work. The boss of a prominent resort here with impeccable ‘green’ credentials, which converts all its organic rubbish into compost, and separates waste into viable categories, followed the weekly garbage truck to its destination. Instead of being kept separate, the bags all ended up being dumped together.

If you have gardening or environmental concerns, contact Patrick at drpaccampbell@gmail.com.

On Deck: BREXIT and the Phuket marine industry