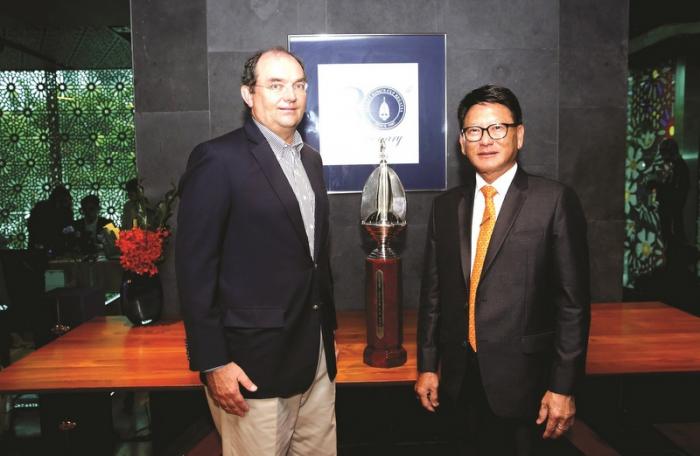 PHUKET: The Phuket King’s Cup Regatta Under Royal Patronage will once again be hosted at Kata Beach Resort & Spa, one of six properties owned and managed by the Kata Group.

The resort is the long-established home of the King’s Cup, with a partnership that stretches back to 1998. With its beachfront location on one of Phuket’s most scenic bays, Regatta participants and general tourists at large return year-after-year to enjoy this special home of the King’s Cup.

Kata Beach Resort and Spa serves as Race Control center, media center, and venue for the Opening Ceremony on December 4 and Closing Awards Ceremony on December 10. The group also houses staff of the Phuket King’s Cup Regatta Organizing Committee and its support teams, as well as providing high quality accommodation to sponsor representatives and VIP attendees.

Pramookpisitt Achariyachai, President of Kata Group Resorts Thailand, said, “Kata Group Resorts is proud to be supporting one of HM the late King Bhumibol of Thailand’s worthy causes, namely his dedication to the sport of sailing in Thailand. To host the regatta is an honor and I personally believe that Phuket has all the right ingredients for the regatta to keep growing.

“Being a host sponsor of such a prestigious event can draw in crowds and interest on a global scale, helping promote Phuket as one of the top sailing destinations. It also serves to support the province’s policy in making Phuket a world sports paradise, as it attempts to attract notable sporting events such as golf, tennis and beach volleyball.”

Kevin Whitcraft, President of the Regatta’s organizing committee, said, “On behalf on the Phuket King’s Cup Regatta Organizing Committee, we are delighted that Kata Group has decided to continue its sponsorship into its 18th consecutive year. The resort really is part of our very own heritage of passion. Over the years, the King’s Cup has been the arena for epic, close-quarter sailing action, whilst it also enjoys a reputation for its hospitality and a series of opening and closing ceremonies.

Kata Group has an exceptional reputation for supporting tourism in Phuket, and has made a massive and ongoing contribution to Phuket becoming one of Asia’s leading sporting destinations.”

The regatta was inaugurated in 1987 to mark the 60th birthday of HM King Bhumibol Adulyadej, and now continues to commemorate the Royal grace of HM the King, who for decades encouraged the promotion of sailing as a sport in Thailand. This year’s event serves to honor the memory of the late King, his life and his countless achievements in the name of his beloved country.

The Phuket King’s Cup is Asia’s biggest regatta, and has recently won the prestigious 2016 Asia Boating Award for ‘Best Asian Regatta’. It is a one-week event held annually, this year from 3-10 December.

On behalf of the Organizing Committee, and the large fleet of sailors scheduled to take part in the event, the Phuket King’s Cup Regatta Under Royal Patronage is honored to commemorate the late King, his dedication to all Thai people, and particularly his skills, passion and contribution to the world of sailing.

The Phuket Gazette is proud to be a longstanding media partner in this prestigious event.