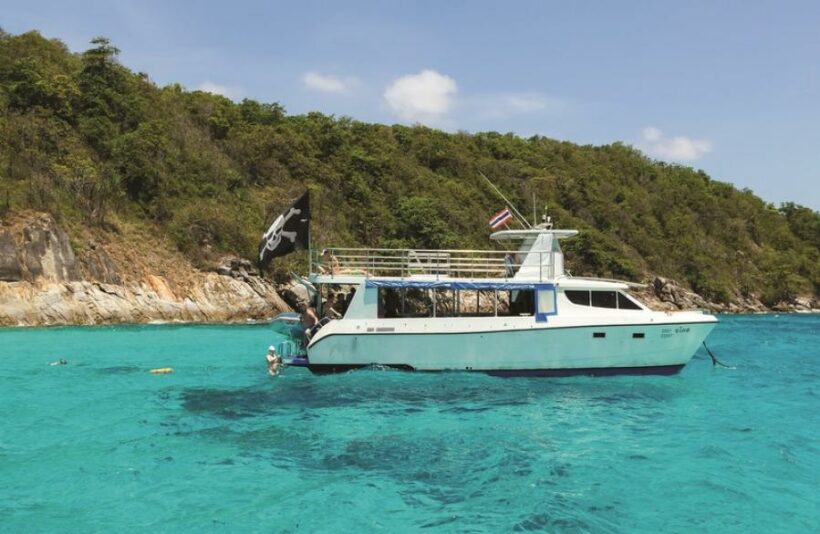 PHUKET: Racha Noi Island is located some 20 kilometers off the southern tip of Phuket.
Unlike its big brother Racha Yai, Racha Noi is much smaller, more secluded and less frequented than Racha Yai.

Construction is forbidden so it leaves Racha Noi with no hotels or accommodation. The island is covered in dense tropical jungle and is uninhabited by people.

Most visitors from Phuket are more likely to visit Racha Yai, just 12 kilometers south of Phuket, being the more popular choice for tourists to Thailand.

The island is bigger and better catered to, with shops, luxury resorts and plenty of mooring space for boats inside the sheltered Bungalow Bay.

This bay is also an ideal dive spot for beginner divers who are getting into open water for the first time.

The downside is that the island is often packed because it is so convenient to reach from Phuket.

For visitors who do not mind journeying on, Racha Noi is around ten kilometers further south.

This small island will appeal to visitors who are looking for a raw tropical island experience.
On approaching Racha Noi, the natural beauty of the island starts to capture ones imagination. Nearly the entire surface of the land is covered with lush green forests.

Another worthwhile attraction at Racha Noi is that the closer you get to it, the clear water starts revealing a thriving coral reef below the surface.

Racha Noi is renowned for its breathtaking reefs. It is home to several popular dive sites that surround the island, including some shipwrecks that have turned into thriving artificial reefs.

Unlike Racha Yai however, Racha Noi’s dive sites are much deeper and not suitable for beginners.

Additionally, because the island is situated in the open sea with no shelter from monsoon winds, the current can be quite strong and unpredictable.

On the other hand, experienced divers who come to Racha Noi have a good chance to spot large open water species such as whale sharks, manta rays and sea turtles, which are frequent visitors to the island.

Non-divers can marvel at the beauty of the coral reefs by snorkeling close to the island’s shores. If you are not a big fan of snorkeling, you may choose to relax on the white sand bank, or go for a swim in the crystal clear sea.

If you are looking for a secluded paradise to get away from the hustle and bustle of Phuket just for a day, Racha Noi might be the perfect place. The best time to visit would be from November until April or mid May.

The boat trip can get very choppy if the weather turns bad so best to avoid visiting during the monsoon months. Since there is no accommodation on Racha Noi, it is best to organize a day trip from either Racha Yai or Phuket. Pick a sunny day and you will not be disappointed.