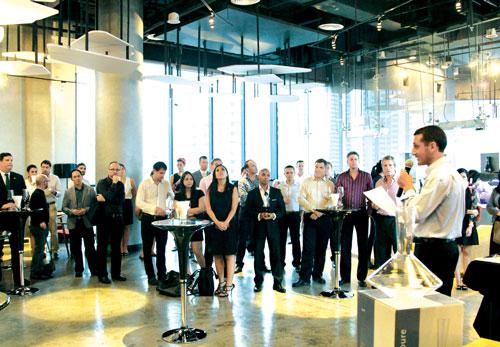 PHUKET: Three establishments from the greater Phuket region found the formula for a perfect wine list and grabbed top spots in the 2013 Wine List of the Year Thailand competition.

Over 60 leading food and beverage establishments and media gathered at Crave Wine Bar & Restaurant in Sukhumvit’s Aloft Hotel to witness the 2013 Wine List of the Year Thailand.

Now in its second year, and gaining strength, 10 awards were handed out in this annual competition aimed at recognizing the efforts and expertize in the development of wine lists and wine culture in the Kingdom.

Prominent winners from Bangkok included Nahm Restaurant which secured both the Best Wine List in Bangkok and the Best National Restaurant List categories and L’Appart Restaurant, Sofitel Sukhumvit conquering the Best List By The Glass category.

Founder of the Awards, Jon Hyams said: “The Sarojin clearly led the field in Phuket. Over the past two years, they have truly stepped outside the square and provided their consumers with a well researched, interesting and diverse wine list without going overboard on numbers of wines.”

“The Sarojin have recognized that the wine list can bring in significant revenue to the establishment, and in fact many customers have made bookings as a result of last year’s award, – Best National Wine List.”

So what’s the secret of an award-worthy wine list?

One of the competition’s judges, Peter Scudamore-Smith MW (Chairman) explained: “A good wine list should be fresh, uncomplicated, brief and accessible to customers to buy glasses of wine. Lists which clearly communicate what is for sale and that have some connection to the venues’ cuisine and origins are in favor.”

“Judges were particularly tough on two areas this year: the inappropriate use of wine critics scores as an aid to market wines on the list. Secondly, the encyclopedic, cumbersome lists with no real purpose were penalized in favor of more progressive, consumer friendly lists,” said Hyams.

The aim of the competition is not only to appreciate the efforts of restaurants, hotels and resorts in creating modern, interesting wine lists, but also to promote wine culture in Thailand.

“Despite the heavy taxes imposed on wine in Thailand, there are signs of a healthy wine culture developing here. It is encouraging to see Thailand’s wine scene grow in the Asia Pacific’s gastronomic scene,” says Hyams. “The Wine List of the Year Thailand promotes a wine culture from the ground level, encouraging importers and F&B establishments to act in a cohesive manner to develop wine culture,” he concluded.

Wine List of the Year Thailand is proudly sponsored by Winesave and Schott Zwiesel. To learn more about the competition click here.